The symbolism of Korea's two leaders meeting was astounding, but their joint declaration to seek peace may amount to nothing but words in the end, some analysts say. 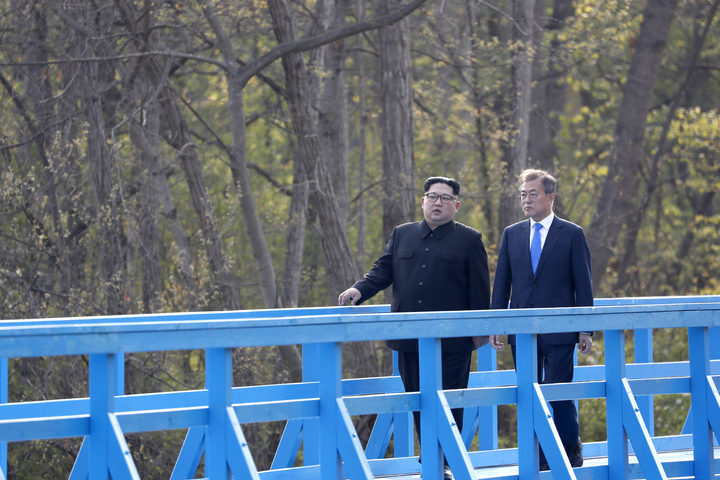 North and South Korea agreed on Friday to pursue the "complete denuclearisation of the Korean Peninsula", and work toward declaring an official end this year to the 1950s Korean war.

The summit of Kim Jong Un and Moon Jae-In was the first between the leaders of North and South Korea in more than a decade.

Kim is expected to possibly meet US President Donald Trump in late May or early June, in what will be an unprecedented first encounter between sitting leaders of the two countries.

The pair, meeting in the truce village of Panmunjom in the heavily fortified demilitarised zone between the two Koreas, spoke at length on a bridge away from reporters' microphones.

They planted a tree together and dined together with their wives.

But experts in politics on the Korean peninsula remained overwhelmingly sceptical about both North Korea's motives and the two Koreas' ability to make good on the declaration.

Albright Stoneridge Group senior director Evans Revere said the summit was a success "from the perspective of its optics, pageantry, and preparation".

The substance of what the leaders discussed was a very different story, he said.

"The Joint Declaration is largely a compilation of past bilateral agreements between Seoul and Pyongyang dating all the way back to 1972, virtually all of which ended up in failure."

There was nothing in the statement that suggested North Korea was prepared to denuclearise.

"And [Donald] Trump's breathlessly positive response to the summit suggests he could fall into a North Korean trap at a US-DPRK summit if the North Koreans offer him even a minor concession," Mr Revere said.

"Kim Jong Un's skills as a tactician and a negotiator were on full display at the Panmunjom summit.

"Let's hope that President Trump's advisers are preparing him particularly well for his meeting with Kim. He's about to meet a real pro."

Middlebury Institute of International Studies senior research associate Joshua Pollack said the series of additional meetings set out in the declaration should help to sustain a sense of momentum, but real progress would not be made without the US.

"Right now the signs are not encouraging," he said.

"Donald Trump keeps restating that there will be no sanctions relief before North Korea disgorges its entire nuclear weapons programme.

Woodrow Wilson Centre Asia programme director Abraham Denmark said: "Beneath the warm images and friendly words, there is still no trust and no clear way ahead."

"Kim is still the same person he was when he purged potential rivals, imprisoned thousands of his people, and had his relatives killed. This was a hopeful moment, but extreme caution is well warranted."

Center for the National Interest defence studies director Harry Kazianis echoed that warning, saying Kim was "once again trying to trick the world again into thinking he will denuclearise".

"While the optics were certainly astounding - with hand-holding, tree planting and big goals - nothing was achieved beyond vague promises that amount to nothing, at least for the moment," Mr Kazianis said.

"What the world must demand now is that Kim turns his words into deeds - like the quick removal of his nuclear weapons. If not, then we know the world has been deceived by North Korea - again."

However, Korea Development Bank's head of North Korean economy department, Kim Young-Hee, said not everything could be resolved "in the blink of an eye".

"Denuclearisation needs to happen in certain phases, which could lead to easing sanctions, then to resuming economic cooperation projects," he said.

"Kim Jong Un ... declared denuclearisation, and promised to halt nuclear tests. That tells [us] he wants the United States to guarantee the safety of his regime."