Three men accused of murdering Maltese journalist Daphne Caruana Galizia - killed by a car bomb in October while investigating government corruption and money laundering - must stay in prison until their trial. 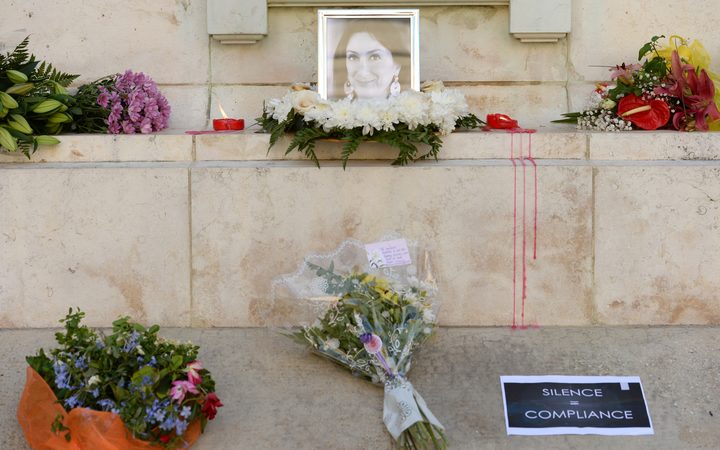 The Great Siege monument in Valletta, Malta, became a temporary shrine for Maltese journalist and blogger Daphne Caruana Galizia after she was killed by a car bomb in October. Photo: AFP / Matthew Mirabelli

A magistrate ruled on Thursday local time that Alfred Degiorgio and George Degiorgio - who are brothers - and Vince Muscat were arrested in early December after a car bomb killed Caruana Galizia when she drove out of her home on 16 October.

The trio have pleaded not guilty, and their lawyers argued they should be freed until a date for their trial is set. The court rejected the request, citing the seriousness of the crime, protection of public order and a risk that the accused might commit other crimes.

The decision came as a group of local and international media groups continue following up stories covered by Caruana Galizia, in an initiative called the Daphne Project.

As part of the project, journalist Nicky Hager has identified Auckland company Denton Morrell as helping manage a network of New Zealand-registered businesses and trusts for clients which may be used by international money launderers.

Meanwhile, Commerce Minister Kris Faafoi said the government was planning a law change to companies law, to make sure it was transparent as it should be, but told Morning Report this morning the government did not want to act "with undue haste".

In southern Malta, some of the Daphne Project journalists reported the country's Economy Minister Chris Cardona met one of the murder suspects in a bar in Siggiewi, citing a secret recording of a witness at the bar and another anonymous source.

Mr Cardona denied the claim. In a statement to Reuters, he said he did not recall talking to any of the three suspects.

On Thursday, when he told the Times of Malta he had not ever been at the bar while any of the accused men were there.

Maltese opposition leader Adrian Delia, speaking in parliament on Wednesday, said the claims against the minister were harmful to Malta and he needed to explain himself.

Mr Cardona had been a frequent target of Caruana Galizia, and he had sued her after she accused him of visiting a brothel while on official business abroad, which he also denied.