Six months ago journalist Daphne Caruana Galizia was killed by a car bomb. While the inquiry into her death is ongoing, it is widely believed she was targeted because of her ongoing investigation into Maltese government corruption and international money-laundering. 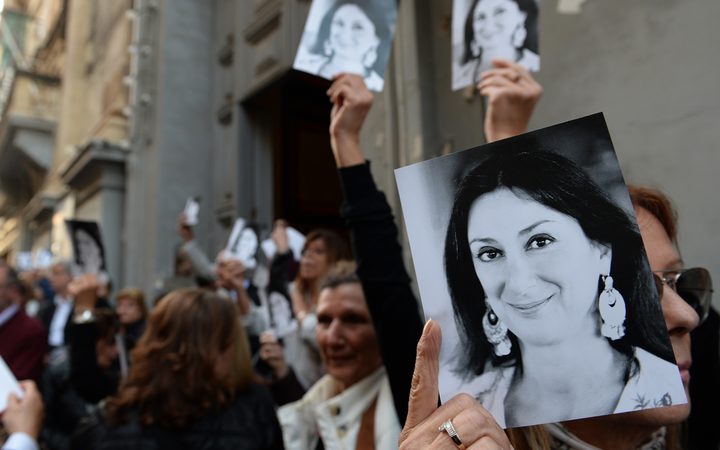 People leave the church of St Francis, after the Archbishop of Malta celebrated mass in memory of murdered journalist Daphne Caruana Galizia on the sixth month anniversary of her death Photo: AFP

Daphne spoke about the scandal on RNZ in 2016 following publication of the Panama Papers, which showed that the Maltese energy minister and prime minister's chief of staff had secret New Zealand trusts called the Haast Trust and Rotorua Trust.

At the time she was killed, Daphne was researching new leads about secret financial links between the Malta and Azerbaijan leaderships, and a private bank in Malta called Pilatus Bank.

A team of 46 journalists from the 16 countries have continued her work, under the banner of The Daphne Project, collecting more than 750,000 files and official documents in order to complete and publish the stories of the slain journalist. The project motto is "They killed the journalist. But not the stories".

The investigation has found evidence of a network of New Zealand-registered companies and trusts, which sources say lead back to Azerbaijan.

Today, as part of the Daphne Project, RNZ published these revelations from freelance Investigative Journalist Nicky Hager. His reporting shines a light on a little-known wealth management company based in Auckland called Denton Morrell.

To read more stories from the Daphne Project, visit forbiddenstories.org.