Former US first lady Barbara Bush, the only woman to see her husband and son each sworn in as US president, has died. 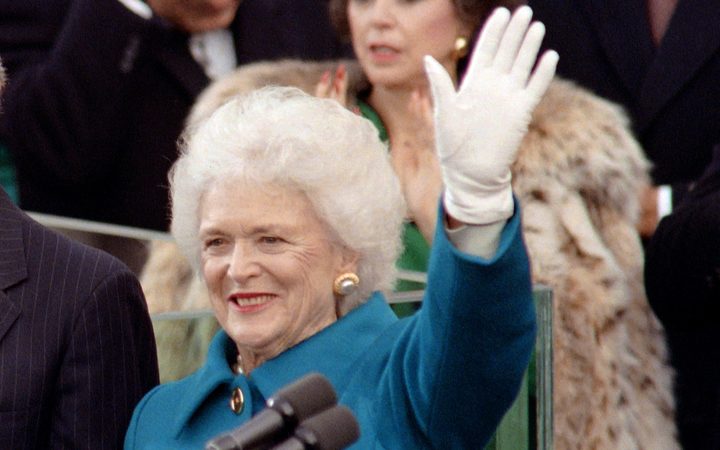 The family announced the news in a statement on Tuesday, local time. She was 92.

She had been dealing with heart and respiratory disease for some time and recently declined further medical treatment, saying she wanted to spend her last days in "comfort care" with her family.

Her husband George H W Bush Snr was elected US President in 1989. Aged 93, he is the longest-lived US president. Her son George W Bush served two terms between 2000 and 2008.

He said in a statement: "My dear mother has passed on at age 92. Laura, Barbara, Jenna, and I are sad, but our souls are settled because we know hers was. Barbara Bush was a fabulous First Lady and a woman unlike any other who brought levity, love, and literacy to millions."

Mr Bush said his mother had "kept us on our toes and kept us laughing until the end", adding: "I'm a lucky man that Barbara Bush was my mother. Our family will miss her dearly, and we thank you all for your prayers and good wishes."

A long-time campaigner for social justice, Mrs Bush spoke out against racial segregation and threw her weight behind the drive to eradicate illiteracy in America.

She was born Barbara Pierce in New York City on 8 June 1925, the daughter of a magazine publisher.

It was while she was still at school - at just 16 - that she met fellow student George Herbert Walker Bush and the couple became engaged in 1943.

"I married the first man I ever kissed. When I tell this to my children they just about throw up," she once said.

At times she had to tone down her more liberal views to avoid clashes with her husband's party.

This included her natural instinct to take a more pro-choice side in the abortion debate. Her support for gun control also elicited strong reaction from his supporters in the powerful National Rifle Association.

She also became aware of segregation in the South after driving across America with two African-American women in order to reach a holiday home in Maine.

She discovered, to her horror, that her two companions were not allowed to sleep or eat in the same hotels and restaurants as white people.

For the rest of her life she spoke out against racial bigotry, often finding herself in conflict with right wingers in the Republican Party.

In 1970, after her husband failed for a second time to reach the Senate, President Richard Nixon appointed him US ambassador to the United Nations. 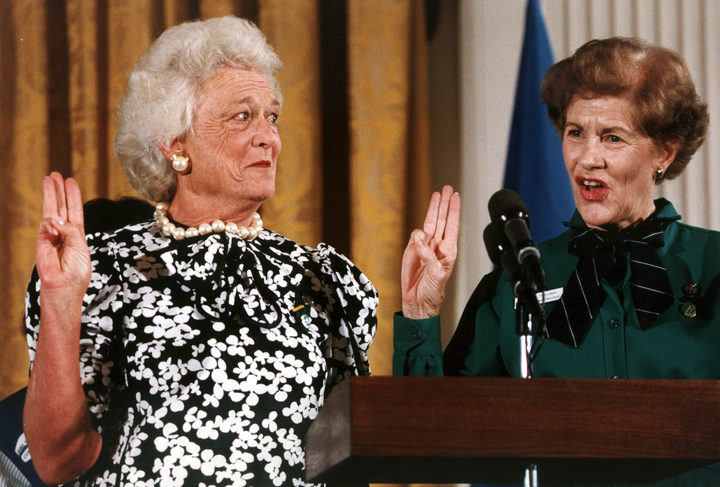 Mrs Bush relished the opportunity to make new contacts among the international community and was able to widen that circle when her husband was posted to Beijing by President Nixon's successor, Gerald Ford.

In the mid 1970s, George was appointed as Director of the CIA. It was a difficult period in Barbara's life during which she suffered from a deep depression.

In her autobiography, she recalled how she would have to stop her car on the side of a highway for fear she would deliberately crash into a tree or an on-coming vehicle.

When George entered the primaries for the Republican presidential nomination, Barbara campaigned enthusiastically for him.

The couple's relatively liberal views on abortion and equal rights were at odds with the growing influence of the conservative wing of the Republican Party under Ronald Reagan.

The former California governor's decision to invite George Bush to be his vice presidential running mate meant Barbara had to publicly toe the party line on these issues.

As the wife of the vice president, Barbara Bush stepped up her campaign to improve adult and child literacy, putting her weight behind organisations working in the field.

She also emerged as an entertaining and witty public speaker, and her experience of two vice presidential campaigns stood her in good stead when her husband ran for the White House in 1988.

When she appeared at the Republican convention that nominated him, she became the first wife of a candidate to speak in support of their husband.

She returned to the subject of abortion during the 1992 campaign, stating her belief that it was a private matter and something on which the Republican Party should not take a position. 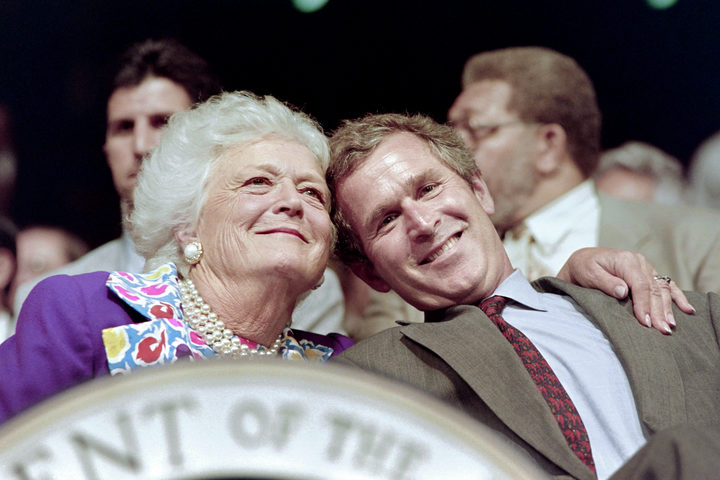 She was unswervingly loyal to her family but did not automatically extend that support to every member of the Republican Party.

'I sat next to her once, thought she was beautiful,' she told an interviewer before adding 'I think she's very happy in Alaska, and I hope she'll stay there."

In 2013, she joked on NBC that the country had probably 'had enough Bushes' but soon had to swallow her words when another son, Jeb Bush, announced he too would run for the Presidency.