International inspectors will try to visit the site of a suspected gas attack which brought US-led missile strikes on Syria and heightened the diplomatic confrontation between the West and Assad's main ally Russia. 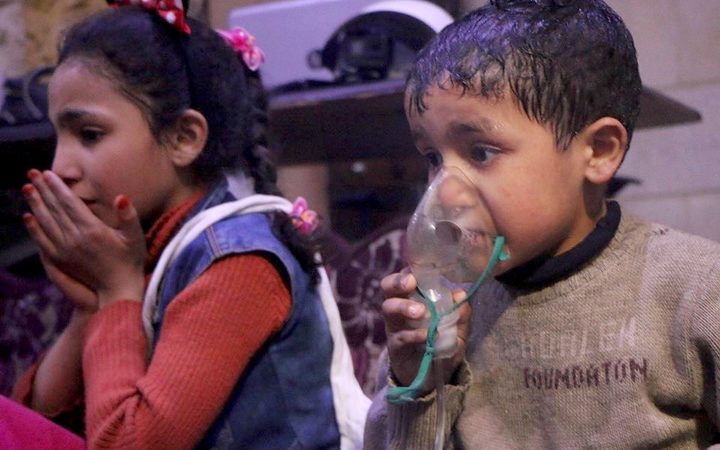 Moscow also condemned the Western states for refusing to wait for the findings of the Organisation for the Prohibition of Chemical Weapons (OPCW) inspection team on the alleged attack before launching the strikes.

But the US envoy to the global watchdog said on Monday Russia may have tampered with the site of the incident on 7 April in Douma outside of Damascus.

"It is long overdue that this council condemns the Syrian government for its reign of chemical terror and demands international accountability those responsible for these heinous acts," US Ambassador Kenneth Ward said in comments seen by Reuters.

In London, British Prime Minister Theresa May was facing criticism over her decision to bypass parliament and take part in the air strikes against Syria.

The United States, France and Britain launched 105 missiles targeting what the Pentagon said were three chemical weapons facilities in Syria in retaliation for the suspected poison gas attack in Douma on 7 April.

The Western countries blame Assad for the Douma attack, which a Syrian medical relief group said killed dozens of people and thrust Syria's seven-year-old conflict into the forefront of global concern once again. The Syrian government and its Russian ally deny involvement.

Inspectors for the Hague-based OPCW met Syrian Deputy Foreign Minister Faisal Mekdad in the presence of Russian officers and a senior Syrian security official in Damascus for about three hours on Sunday.

The inspectors were due on Monday to attempt to visit Douma, but the British delegation to the OPCW said they had not yet been granted access, citing the agency's director general.

Douma, which lies in the eastern Goutha district on the outskirts of the capital, was one of the last bastions near Damascus of rebels fighting to topple Assad, and the alleged attack took place amid a ferocious government offensive.

In the aftermath, the remnants of the rebel army evacuated, handing Assad one of the biggest victories in a war that has killed about half a million people and laid waste to whole cities.

The US-led strikes did nothing to alter the strategic balance or dent Assad's supremacy and the Western allies have said the aim was to prevent the further use of chemical weapons, not to intervene in the civil war or topple Assad.

British Foreign Secretary Boris Johnson made this clear on Monday as he arrived at a meeting of EU foreign ministers in Luxembourg, telling reporters: "I'm afraid the Syrian war will go on in its horrible, miserable way. But it was the world saying that we've had enough of the use of chemical weapons."

The US ambassador to the United Nations, Nikki Haley, said on Sunday the United States would announce new economic sanctions aimed at companies dealing with equipment related to Assad's alleged use of chemical weapons.

"They are hard for us, but will do more damage to the USA and Europe," RIA news agency quoted Mr Serebrennikov as saying.

Although US President Donald Trump had declared: "Mission accomplished" after the strikes, US Lieutenant General Kenneth McKenzie at the Pentagon acknowledged that elements of the program remained and he could not guarantee that Syria would be unable to conduct a chemical attack in the future.

Sayyed Hassan Nasrallah, the leader of the Lebanese Hezbollah movement, which fights alongside the Syrian army, said the US military had kept its strikes limited because it knew a wider attack would spark retaliation from Damascus and its allies and inflame the region.

The Western leaders were also facing scrutiny at home over their actions.

Britain's May will make a statement to parliament on Monday on her decision and will repeat her assertion that Assad's forces were highly likely responsible for the attack. The allies could not wait "to alleviate further humanitarian suffering caused by chemical weapons attacks", according to excerpts of her speech.

But she will be questioned over why she broke with a convention to seek parliamentary approval for the action, a decision that she and her ministers say was driven by the need to act quickly.

Britain has said there are no plans for future strikes against Syria, but Johnson warned Assad that all options would be considered if chemical weapons were used against Syrians again.