At least 70 people have died in a suspected chemical attack in Douma, the last rebel-held town in Syria's Eastern Ghouta, rescuers and medics say. 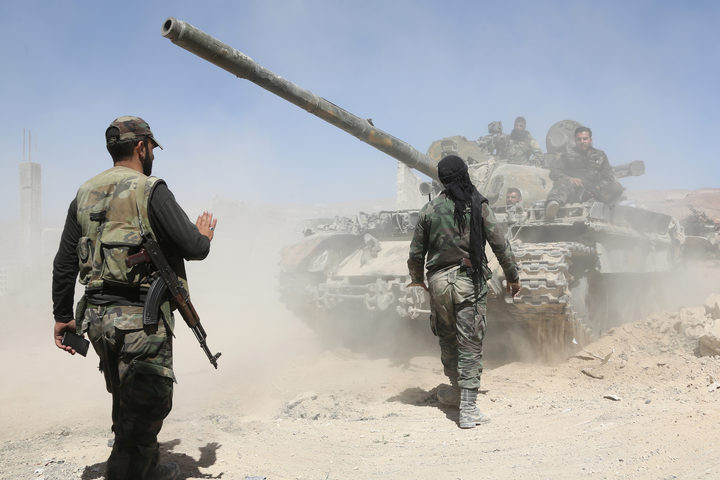 There has been no independent verification of the reports.

Syria's government has called the allegations of a chemical attack a "fabrication".

The US state department said reports suggested "a potentially high number of casualties", including families in shelters.

It said Russia - with its "unwavering support" for Syria's government - "ultimately bears responsibility" for the alleged attacks.

"The regime's history of using chemical weapons against its own people is not in dispute," it said in a statement.

What do we know about the attack?

Several medical, monitoring and activist groups reported details of a chemical attack, but figures vary and details of what happened are still emerging.

"Seventy people suffocated to death and hundreds are still suffocating," said Raed al-Saleh, head of the White Helmets. An earlier, now deleted tweet, put the number of dead at more than 150.

The pro-opposition Ghouta Media Center tweeted that more than 75 people had "suffocated", while a further 1000 people had suffered the effects of the alleged attack.

It blamed a barrel bomb allegedly dropped by a helicopter which it said contained Sarin, a toxic nerve agent.

The Union of Medical Relief Organizations, a US-based charity that works with Syrian hospitals, told the BBC the Damascus Rural Specialty Hospital had confirmed 70 deaths.

A spokeswoman said reports on the ground suggested a much higher number of around 180 dead, but that it was hard to reach victims.

She said there were reports of people being treated for symptoms including convulsions and foaming of the mouth, consistent with nerve or mixed nerve and chlorine gas exposure.

Continued shelling overnight and on Sunday was making it impossible to reach victims.

As the allegations emerged, Syria's state news agency Sana said the reports were invented by the Jaish al-Islam rebels who remain in control in Douma.

"Jaish al-Islam terrorists are in a state of collapse and their media outlets are [making] chemical attack fabrications in an exposed and failed attempt to obstruct advances by the Syrian Arab army," Sana said.

Has the Syrian government used chemical weapons before?

In August 2013, rockets containing the nerve agent Sarin were fired at rebel-held areas of the Eastern Ghouta, killing hundreds of people.

A UN mission confirmed the use of Sarin, but it was not asked to state who was responsible. Western powers said only Syrian government forces could have carried out the attack.

In April 2017, more than 80 people died in a Sarin attack on the opposition-held town of Khan Sheikhoun, and a joint inquiry by the UN and the Organization for the Prohibition of Chemical Weapons (OPCW) held the Syrian government responsible.

Is it likely there will be any repercussions for Damascus?

"An urgent investigation is needed and the international community must respond. We call on the Assad regime and its backers, Russia and Iran, to stop the violence against innocent civilians," the statement added.

US President Donald Trump ordered a cruise missile attack against Syria following the Khan Sheikhoun attack a year ago. It was the first direct US military action against forces commanded by Syria's president.

Last month, the Washington Post newspaper reported that Mr Trump had discussed the possibility of another American attack on Syria with top security officials, but decided not to take action.

Days later, Defence Secretary Jim Mattis warned that it would be "unwise" for Syria to launch chemical attacks.

Douma is the last rebel-held town in Syria's Eastern Ghouta region, and is under siege from Russian-backed Syrian government forces.

An intense aerial and ground assault was launched on Friday after talks between Moscow and the rebels broke down.

Before negotiations failed, Jaish al-Islam had been trying to secure a deal that would let its members stay in Douma as a local security force.

The UK-based Syrian Observatory for Human Rights, a monitoring group, said government air strikes had killed 40 civilians on Friday, and a further 30 on Saturday.

More were feared to have been killed in new shelling on Sunday - even as the Syrian government said it was ready to start negotiations with Jaish al-islam.

State media said six civilians had also died in rebel shelling of the capital Damascus, with 38 injured. Jaish al-Islam denied it was responsible.

Forces loyal to President Assad have recaptured almost the entire Eastern Ghouta region through a fierce offensive that started in February.