Russia will not co-operate with the UK inquiry into how an ex-spy and his daughter were poisoned until it has been given a sample of the substance used, its foreign minister has said. 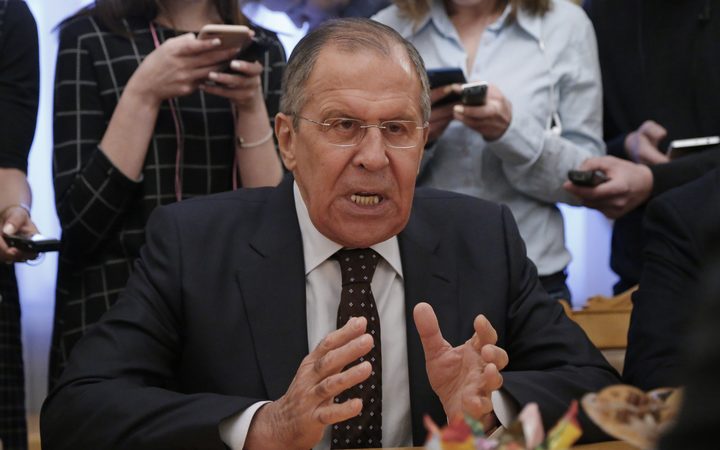 Russia has been given a midnight deadline by Prime Minister Theresa May to explain why a Russian-made nerve agent was used in the attack in Salisbury on former Russian spy Sergei Skripal and his daughter Yulia.

Former double agent Mr Skripal, 66, and daughter Yulia, 33, were found slumped on a bench in Salisbury city centre in Wiltshire on 4 March. Police said they remain critically ill in hospital.

A police officer who fell ill after attending the incident - Det Sgt Nick Bailey - was also taken to hospital and placed in intensive care. He remains in a serious condition.

Mrs May told the Commons on Monday that the poison used in the attack was a military-grade nerve agent developed by Russia. She said it was part of a group of nerve agents known as Novichok.

"Either this was a direct action by the Russian state against our country, or the Russian government lost control of its potentially catastrophically damaging nerve agent and allowed it to get into the hands of others," she said.

The PM warned that if there was no "credible response" by the end of Tuesday, the UK would conclude there has been an "unlawful use of force" by Moscow.

However, Russian Foreign Minister Sergey Lavrov described claims of Russian involvement as "rubbish" and said it had been refused access to the nerve agent.

Home Secretary Amber Rudd said the investigation was "going well" after chairing another meeting of the government's emergencies committee Cobra.

She announced that MI5 and police are to look into claims that as many as 14 deaths on UK soil may be linked to Russia.

Police confirmed Mr Skripal, who came to the UK in 2010 in a "spy swap" after he had been convicted by Russia of passing information to MI6, was a British citizen.

Speaking outside New Scotland Yard, Assistant Commissioner Neil Basu said 35 other people had been seen in hospital, of whom 34 had been assessed and discharged, while the condition of one person is being monitored.

He appealed for witnesses who saw the pair in her father's car - licence plate number HD09 WAO - between 1pm and 1.45pm on the day of the poisoning.

He revealed Miss Skripal had flown into Heathrow Airport on 3 March, and said the police investigation will take "many weeks", with the "prime focus" being how the poison was administered.

However, he said detectives were "not declaring a person of interest or suspect at this time".

Novichok agents are a group of advanced nerve agents developed in secret by the Soviet Union in the 1970s and 1980s. One chemical - called A-230 - is reportedly five to eight times more toxic than VX nerve agent, which can kill a person within minutes.

Some are liquids, others are thought to exist in solid form. Some are reported to be "binary weapons", meaning they are typically stored as two less toxic chemicals which when mixed, react to produce the more toxic agent

One variant was reportedly approved for use by the Russian military as a chemical weapon. Designed to escape detection by international inspectors, their existence was revealed by defectors.

Mrs May said the UK must "stand ready to take much more extensive measures" against Russia than it had previously.

She said these measures would be set out in the Commons on Wednesday should there be no adequate explanation from Russia.

Britain could expel Russian diplomats, as it did after the poisoning of former Russian Federal Security Service operative Alexander Litvinenko in 2006 with radioactive polonium.

Other possible actions could include freezing financial assets, bans on visas, boycotting the 2018 Fifa World Cup in Russia and taking Russian broadcasters such as RT off the air in the UK.

The UK ambassador to Russia, Laurie Bristow, has met the Russian deputy foreign minister in Moscow.

US President Donald Trump said he would take Britain's assessment that Russia was behind the attack "as fact".

Mr Trump said he would be speaking to Theresa May later, adding: "It sounds to me they believe it was Russia based on all the evidence they have".

Answering a separate question by reporters, he added: "As soon as we get the facts straight, if we agree with them, we will condemn Russia or whoever it may be".

Former US Secretary of State Rex Tillerson, who spoke to Mr Johnson on the phone about the case on Monday before he was sacked, had said the US supported the UK's assessment that Russia was likely responsible.

Nato secretary-general Jens Stoltenberg said the UK was a "highly valued ally" and described the incident as "of great concern".

He said the use of any nerve agent was "horrendous and completely unacceptable" and said Nato had been in touch with the UK authorities.

He added: "We agree that those responsible - both those who committed the crime and those who ordered it - must face appropriately serious consequences.

"We stand in solidarity with our allies in the United Kingdom and will continue to coordinate closely our responses."

German Foreign Minister Sigmar Gabriel said any Russian link would be a "very serious matter" and Berlin stood "in solidarity" with the UK.

Mrs May also spoke to French President Emmanuel Macron on Monday and the two leaders "agreed that it would be important to continue to act in concert with allies" to address what it called "the wide pattern of aggressive Russian behaviour", her spokesman said.

European commissioner Valdis Dombrovskis was among a number of leading EU figures to express "solidarity" with the UK.

He said: "We are very much concerned with this situation - also with the findings the UK has so far."