The woman who made a sexual misconduct complaint against Australia's former deputy prime minister Barnaby Joyce says the way she has been treated since making that allegation shows why people in that situation do not come forward. 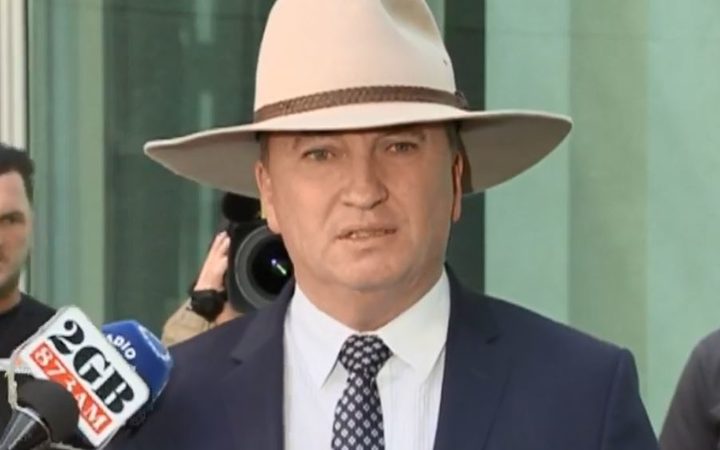 Barnaby Joyce resigned after it was revealed he had an affair with a staffer who is now pregnant. Photo: Screengrab from Ten News

WA woman Catherine Marriott has strongly rejected suggestions her complaint was the subject of political influence, saying such speculation was "hurtful and incorrect", and the reason why she was initially reluctant to come forward.

Details of an internal review led by WA Nationals state president James Hayward have emerged in recent days, which found the involvement of MPs in the issue compromised the party and "deprived" Mr Joyce of a fair hearing.

There have also been suggestions WA Nationals MPs were involved in the process of drafting a statement on behalf of Ms Marriott.

But in a statement released on Wednesday, she vehemently hit back at suggestions there was political motivation or influence linked to her complaint.

"The WA National Party played no role whatsoever in my personal decision to make and progress this complaint, nor me engaging professional support to help me through this issue," Ms Marriott said.

"Speculation on this issue by people who are unaware of the facts is impacting my right to a fair and due process.

"The additional stress of having to go through this publicly and with people's judgement is the exact reason people don't come forward.

"I am disappointed if my complaint along with my efforts to have this confidentially investigated are being used for political advantage and my integrity, as a result, questioned."

Ms Marriott did say she sought initial advice from the WA Nationals about how to make the complaint, saying they pointed her in the direction of the federal party.

The WA party's handling of the matter has upset some MPs and lay-party members, but the ABC understands there is no imminent threat to Ms Davies's leadership.

One MP described speculation to the contrary as "weird", with another labelling it "absolute rubbish", and insisting Ms Davies was not going anywhere.

One also said the WA Nationals' state council first moved against Mr Joyce, ahead of the parliamentary party, dismissing suggestions MPs had conspired against the then federal leader.

But before that, Mr Hayward told a Perth newspaper Ms Davies' choice to publicly call for Mr Joyce's resignation was her decision and an "unfortunate" move.

Several Nationals MPs are furious over the comments Mr Hayward made, believing the names of those in the parliamentary party have been unfairly dragged through the mud as a result.