Film producer Harvey Weinstein won't be going to the Oscar ceremony, but the film producer's presence is still being felt in Hollywood. 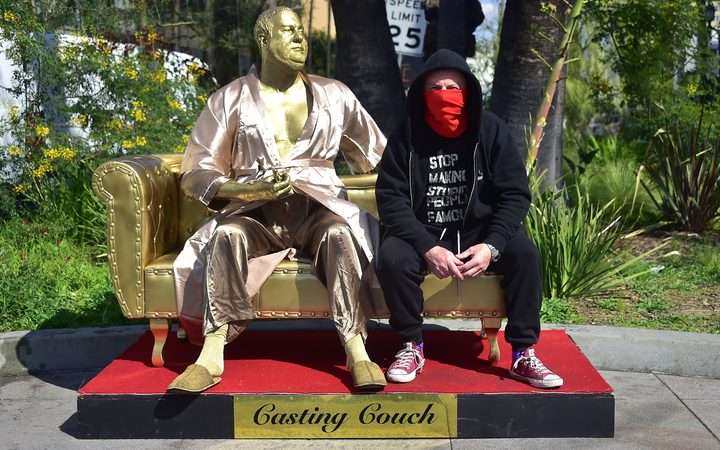 Artist Plastic Jesus poses with the gold sculpture of Harvey Weinstein on his infamous casting couch. Photo: AFP or licensors

Los Angeles-based street artist Plastic Jesus has unveiled a statue called 'Casting Couch,' depicting a life-size Weinstein, clothed in a bathrobe, sitting on a golden colored couch and holding an Oscar. It was installed near the Hollywood venue where the Academy Awards ceremony will be held.

More than 70 women have accused Weinstein of sexual misconduct, including rape. Weinstein has denied having nonconsensual sex with anyone.

His representatives did not immediately respond to a request for comment on the installation.

The accusations against Weinstein triggered a flood of allegations of sexual impropriety by other celebrities that have rocked Hollywood and dominated this year's movie awards season.

"Whilst many thought the 'casting couch' was a thing of the past it was clearly still a part of the Hollywood culture," Plastic Jesus said in a statement on his Facebook page.

"Hopefully now in the light of recent allegations against many leading figures in Hollywood the industry will clean up its act," he said. 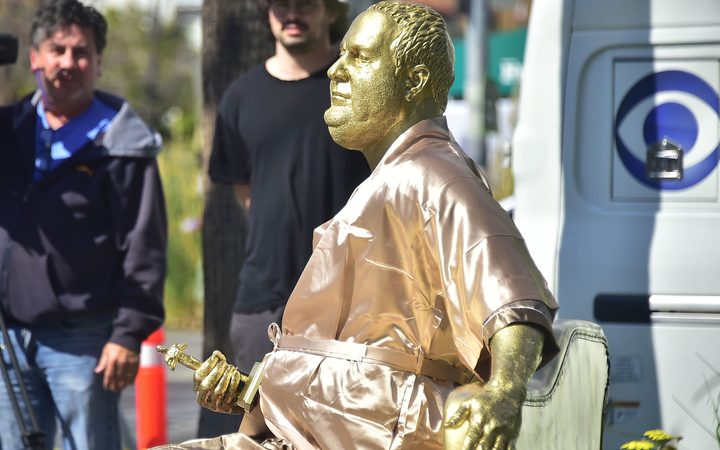 A gold sculpture of Harvey Weinstein on his infamous casting couch holding an Oscar statue is on display in Hollywood. Photo: AFP or licensors

Weinstein was one of the movie industry's most influential men, powering independent movies such as The King's Speech and Shakespeare in Love to Oscar best picture wins.

He was expelled from the Academy of Motion Picture Arts and Sciences last year and fired from his company, the Weinstein Company. The company said on Sunday it planned to file for bankruptcy.

The 'Casting Couch' statue followed the appearance in Los Angeles on Wednesday of billboards designed by street artist Sabo that accused the entertainment industry of staying silent about sexual misconduct.

Plastic Jesus said the Weinstein statue was a collaboration with the artist Joshua 'Ginger' Monroe and took two months to produce. It was paid for by donations through their websites.

He and Ginger were also responsible for producing naked statues of Donald Trump that appeared in various US cities in 2016, before he was elected president.