Much of Europe has been blanketed in snow as cold weather spreads as far south as the Mediterranean coast. 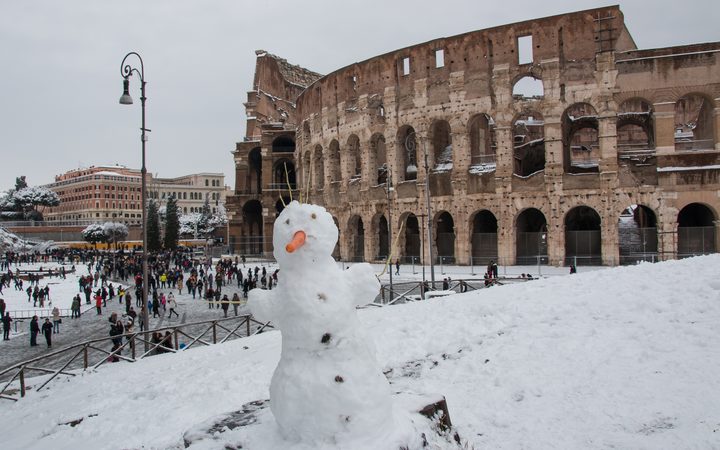 A snowman is seen in front of the ancient Colosseum during a heavy snowfall on 26 February, 2018 in Rome. Photo: AFP

The cold spell, nicknamed "the Beast from the East" in the UK, is carrying freezing winds across the continent, and temperatures as low as -30°C.

At least seven people have been reported dead since Monday - five in Poland and two in Romania.

The International Committee of the Red Cross has appealed to the public to check on at-risk neighbours.

"Just knocking on someone's door to check they have everything they need can make a huge difference," the ICRC's Europe director, Simon Missiri, said.

"It could even be the difference between life and death." 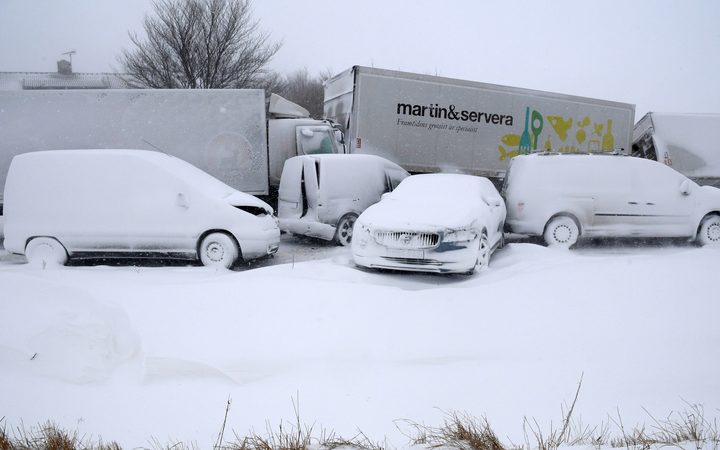 Several trucks and cars, covered with snow, stand deserted after a pileup on February 27, 2018 near Sjobo, southern Sweden. Photo: AFP

Red Cross emergency teams have opened shelters and are providing hot food and blankets for thousands of people across the continent, it said.

Polish police said five people had died on Monday as the temperature dropped. Police have appealed to the public to assist the infirm - or the intoxicated - who have fallen in the snow.

Two more were reported to have died in Romania on Tuesday. One of the dead was an 83-year-old woman who was found collapsed in the snow, while another was a 65-year-old man, Reuters news agency reports.

Romanian police said they had closed dozens of roads, and that almost 100 trains had been cancelled.

On Tuesday, snow was seen on the excavation site of the ancient city of Pompeii, near Naples in southern Italy - where the average February temperature is 6°C to 14°C.

Germany's meteorological office, meanwhile, recorded a temperature of -30° at Zugspitze, the country's highest peak, and lows well below -10°C in most of the country.

AFP news agency reports a total death toll of at least 24 people in the past four days, adding that many of the deaths involved those sleeping rough in cities.

That includes three rough sleepers in France, three in the Czech Republic, and one in Italy, it said.

Emergency shelters have been opened by many authorities to cope with the needs of homeless citizens.

The cold weather is expected to continue until late in the week.

BBC weather said an approaching area of low pressure in the Atlantic would result in heavy snow - followed by rain - hitting France and northern Spain.

In northern Europe, biting cold winds are expected to continue, with more snow expected to reach the UK and Ireland by Thursday.