In one of the biggest recalls in history, more than two million vehicles are being compulsorily recalled in Australia to replace defective Takata airbags. 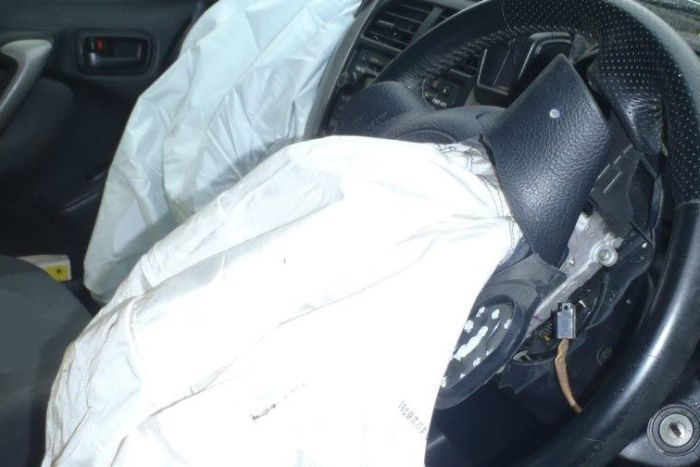 Takata airbags have a defect that could cause them to explode. Photo: NT Police

The airbags have been associated with 20 deaths globally, including one death in Australia last year.

The faulty Takata airbags' inflators contain a defect that can cause them to explode and propel shrapnel into drivers and passengers.

The shards have been known to puncture eyes, faces, necks and chests.

Cars on the compulsory recall list include various models that have already been subject to a voluntary recall - Toyota, Mazda, Honda, BMW, Chrysler, Lexus, Mitsubishi, Nissan, Subaru and several others - but also apply to models from other manufacturers that had previously not been identified.

The Australian Competition and Consumer Commission (ACCC) has ordered these manufacturers to provide a list of Vehicle Identification Numbers (VINs) of the 875,000 additional affected vehicles by April 3. Those VINs will then be added to the existing compulsory recall list.

Last year, the ACCC issued a voluntary recall on the 60 types of cars sold in Australia that used the faulty airbags.

But Assistant Minister Michael Sukkar said today that voluntary recall had not been robust enough.

"I've agreed with this recommendation because the previous voluntary recall has not been satisfactory overall, and it's the safety of all Australians which is the first priority of this government," he said.

ACCC chairman Rod Sims said people who had already replaced airbags under the voluntary recall last year would need to check again to see if their car was listed on the new recall.

This is because in some cases, faulty Takata airbags were replaced with like-for-like, which only delayed the risk of the airbag exploding.

All defective Takata airbags will need to be replaced by December 31, 2020.

The ACC believes about 27,000 of Takata's Alpha airbags are yet to be replaced.

Mr Sims said the Alpha airbags carry the highest risk of explosion, classified as "critical", and cars with these airbags were not safe to drive.

He said it was not clear how many of these cars were still on Australian roads, but urged consumers to check the list and immediately stop driving their cars if they found it on the "critical" list.

"I think there's about 27,000 still around, but we suspect most of them are in junk yards," he said.

"But for those airbags we're saying to people don't drive the car again, just contact the manufacturer, they are obliged to come out and fix it."

Replacements of the non-critical airbags will be prioritised according to the level of risk, which depends on several factors including age and the climate in which the car is driven.

"The problem with the airbag is the drying agent. There's a problem in the design," Mr Sims said.

"When the moisture gets in, the propelling mechanism can alight too quickly and cause fragments of metal to come out from the airbag, which, tragically, has killed one person in Australia."

Mr Sukkar identified the Northern Territory and north Queensland as those climates that would constitute a higher risk.

Consumers should not be out of pocket or inconvenienced

Mr Sims said manufacturers would bear the cost of all replacements, and that consumers should not be overly inconvenienced by getting their airbags replaced.

"For most consumers, the fundamental obligation is that, if, when you take your car in to get it replaced and you can't get it back out of there within 24 hours, you are entitled to a loan car or hire car," he said.

"For those who live a long way away or in remote areas, they [manufacturers] may have to go to you.

"If you bought the car in a very remote location and it's too hard to come in, they've got to go to you, and in relation to those Alpha airbags … don't drive the car, just contact the manufacturer. They are obliged to come out and fix it."

"It is an indictment, quite frankly, on this government that they have taken so long to pull the trigger on a compulsory recall," he said.

"There is a provision of the Competition and Consumer Act that allows the responsible minister to pull the trigger on a compulsory recall if an imminent safety threat arises."

Mr Sukkar said the Government's response could not have been any quicker, considering the process the ACCC was required to carry out before making any recommendation of a compulsory recall.

Mr Sims added the ACCC had been working "around to clock" to resolve the issue.