A Degas painting stolen from a Marseille museum in 2009 has been found on a bus near Paris.

French culture minister, Françoise Nyssen, said authorities discovered the artwork in the luggage compartment of the bus that was stopped in a motorway service station. 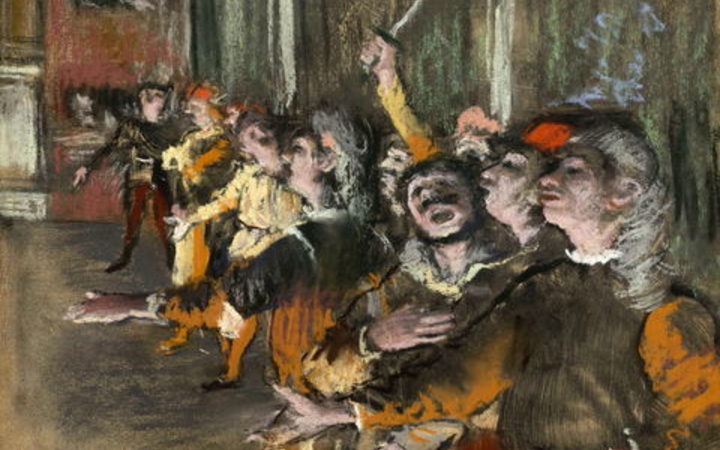 Experts confirmed it was Les Choristes, a pastel painting said to be worth £700,000.

None of the passengers admitted to owning the painting.

Customs officials discovered the painting inside a suitcase. Nobody has been arrested.

It was found during a random search, according to Reuters news agency.

The work was stolen from Marseille's Musée Cantini in 2009. It had been on loan from the Musée d'Orsay in Paris.

Authorities at the time said there was no sign of a break in.

The pastel artwork dates from 1877.

This Degas find is not the first time a missing piece of art has turned up in an odd location.

Back in 2015, US punk band Stereo Fire Empire found a stolen artwork in New Orleans, leaning against a wall, mere hours after it was reported stolen.

In 2014, a number of unknown Andy Warhol works were discovered on 30-year-old Amiga disks. The artist was paid to create the works for the launch of the Amiga 1000, a Commodore brand computer.

An art historian in 2009 spotted a lost work by Hungarian artist Róbert Berény, hanging in the background of the children's film Stuart Little when watching it with his daughter. Sleeping Lady with Black Vase was sold at auction five years later for £182,000.

And in 2007 in New York, a painting stolen 20 years previously was found lying in a pile of rubbish in Manhattan's Upper West Side in New York. Tres Personajes by Mexican artist Rufino Tamayo sold for more than £500,000 afterwards.