A helicopter carrying senior officials has crashed while they assessed damage from Mexico's 7.2 magnitude quake, killing at least 14 including a baby. 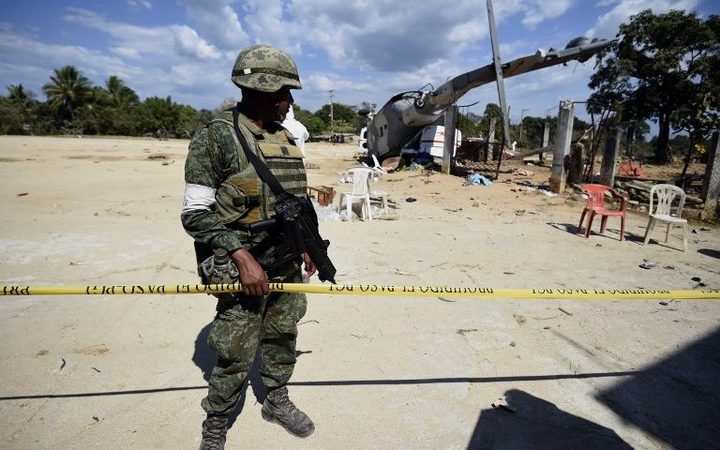 A Mexican soldier stands guard at the site of the accident where a military helicopter fell on a van in Santiago Jamiltepec, Oaxaca state, Mexico. Photo: AFP or licensors

Mexico's interior minister and the governor of the south-west Oaxaca state were on board, but neither was hurt.

The aircraft's pilot lost control as it was coming in to land, Interior Minister Alfonso Navarrete said.

The 7.2-magnitude quake's epicentre was in Oaxaca but it shook buildings in Mexico City, 350km away.

No deaths have been reported in the earthquake itself.

Officials said the military helicopter had crashed on top of several vans carrying earthquake survivors in a field while trying to land in the village of Santiago Jamiltepec, not far from the epicentre.

Fourteen people - nine women, four men and two children, including a six month old baby - were killed in the crash, the Office of the Prosecutor of Oaxaca said.

Witnesses say the village had been affected by a power cut and it was dark when the helicopter approached to land.

It circled the village several times, raising a thick cloud of dust and further reducing visibility.

It is not clear whether anyone in the aircraft was among the dead, although Mr Navarrete said some passengers were injured.

The quake was 24.6km underground and some buildings were damaged. The epicentre was near the town of Pinotepa de Don Luis.

After the tremor, thousands of people were seen fleeing buildings in Mexico City as the ground shook.

Some were crying, while others hugged each other on the streets of the capital. Traffic stopped for a few minutes.

There were clouds of dust near buildings already damaged by the September quakes.

Mexico is one of the most seismically active regions in the world, sitting on top of three of the Earth's largest tectonic plates - the North American, Cocos and Pacific plates.