Thirteen Russians have been charged with interfering in the US 2016 election, in a major development in the FBI investigation. 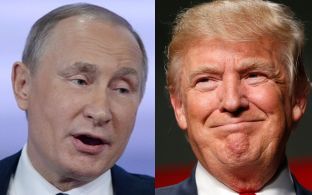 The announcement was made by Special Counsel Robert Mueller, who is investigating alleged Russian meddling.

Three Russian companies are also named in the indictment.

One of them is the Internet Research Agency, based in St Petersburg, which the 37-page indictment said "had a strategic goal to sow discord in the US political system, including the 2016 US presidential election".

Speaking at a news conference, Deputy Attorney General Rod Rosenstein said there was no allegation that any American was "a knowing participant in this illegal activity" nor was it alleged that the meddling altered the election outcome.

What does the indictment say?

It says a group of Russians:

It also says those named in the indictment had visited the US posing as American citizens and had begun discussing how to affect the election as early as 2014.

"By 2016, defendants and their co-conspirators used their fictitious online persons to interfere with the 2016 US presidential election," the indictment continues.

"They engaged in operations primarily to communicate derogatory information about Hillary Clinton, to denigrate other candidates such as Ted Cruz and Marco Rubio, and to support Bernie Sanders and then-candidate Donald Trump."

How has Russia reacted?

"There were 13 of them, according to the US Department of Justice. Thirteen people interfered with the US elections?" said Maria Zakharova, a Russian foreign ministry spokesman. "Thirteen against the billion-dollar budgets of the security services? Against espionage and counter-espionage, against new developments and technologies? Absurd? Yes."

One of the men named in the indictment - Yevgeny Prigozhin, who is known as "Putin's chef", denied election tampering.

"The Americans are very impressionable people, they see what they want to see," he was quoted as saying by Russian news agency Ria Novosti on Friday. "I have great respect for them. I'm not at all upset that I'm on this list. If they want to see the devil, let them see him."

Mr Prigozhin has been a friend of Mr Putin since the 1990s. He has built up a business empire and has been accused of using companies to diffuse pro-Kremlin opinions via fake internet identities.

What is the investigation about?

In May last year, Mr Mueller was appointed special counsel to investigate whether anyone from his campaign colluded in the effort.

As part of the inquiry, former Trump campaign manager Paul Manafort has been charged with conspiring to defraud the US in his dealings with Ukraine, and conspiracy to launder money.

A business associate of his, Rick Gates, was also charged with conspiracy to launder money. A third adviser to the Trump campaign, George Papadopoulos, pleaded guilty to lying to the FBI.

Mr Trump has been accused by opponents of trying to interfere with the investigation. The president denies this - as well as any allegation of collusion with Russia during the campaign.