A man who lent his flat to two jihadists has been cleared in the first trial over the 2015 Paris attacks. 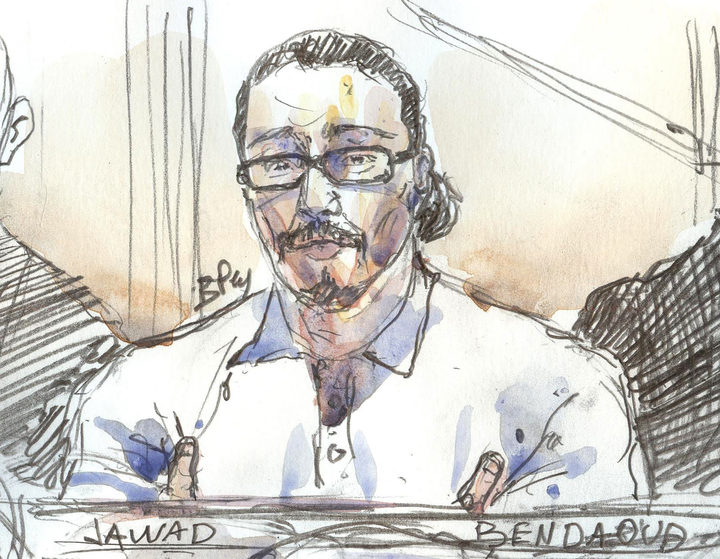 A courtroom sketch which shows Jawad Bendaoud in the dock. Photo: AFP

But he repeatedly denied knowing the men were attackers. He was mocked in France for pleading his innocence as he was arrested live on television.

The Islamic State group said it was behind the attacks on the national stadium, bars and restaurants in the city, as well as the Bataclan concert venue.

Prosecutors had been seeking a four-year jail term for Mr Bendaoud, a drug-dealer and small-time criminal, for allegedly harbouring criminals at his flat in Saint Denis, in the north of the French capital.

More serious terrorism charges were dropped during the trial, after prosecutors said there was insufficient evidence that he knew the men were attackers.

Abaaoud, a Belgian national, is believed to have been the ringleader of the Paris attacks, and was later killed in a police raid on the Saint Denis flat. His accomplice, Akrouh, blew himself up during the raid.

In a video that went viral after the assaults, Mr Bendaoud insisted he was not aware they were wanted by police.

"Someone asked me for a favour, I helped them out," he said.

In court, Mr Bendaoud gave an eccentric, at times buffoonish performance in court, reports the BBC's Hugh Schofield in Paris.

"I may go one day to hell," he said. "But it won't be for helping terrorists because I did not know they were terrorists."

While Mr Bendaoud was acquitted, two other defendants were convicted and sentenced to prison by the court in Paris on Wednesday.

Youssef Aitboulahcen, the brother of a woman killed in the police raid on the Saint Denis flat, was told to serve four years in prison for failing to alert authorities about a terror plot.

The only surviving alleged perpetrator of the Paris attacks, Salah Abdeslam, is on trial in Belgium on charges relating to his arrest there in 2016.

He is not expected to go on trial in France until 2020 at the earliest.