The sex scandal involving one of the world's biggest charities deepens with the Haitian government seeking the arrest of a former Oxfam employee accusing him of paying locals for sex. 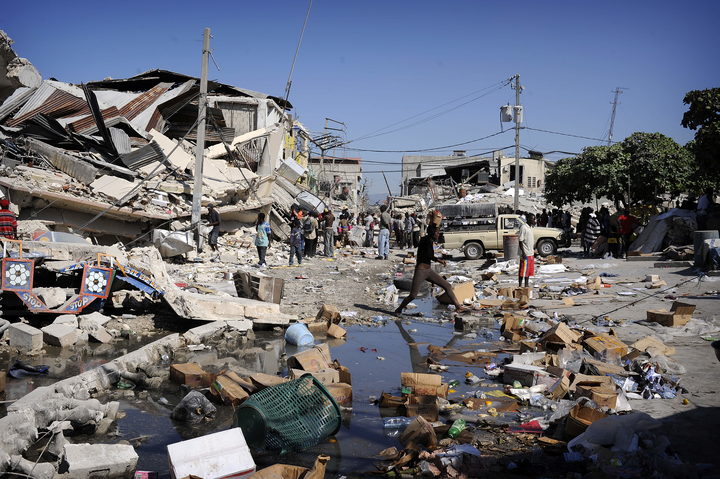 Roland van Hauwermeiren was Oxfam's head of mission in Haiti in the period straight after the country's devastating 2010 earthquake and he has been accused of paying locals for sex - which is illegal in Haiti.

The Haitian President posted a comment to Twitter (in French) saying: "There is nothing more outrageous and dishonest than a sexual predator who uses his position as part of the humanitarian response to a natural disaster to exploit needy people in their moment of greatest vulnerability."

Oxfam is looking into claims that Roland van Hauwermeiren was employed by Oxfam two years after he left another aid agency because of concerns about his behaviour.

There have also been accusations against Oxfam staff working in Asia with a senior figure in Oxfam saying she was aware of past claims of sexual abuse involving the charity's staff there.

Lan Mercado told the BBC the cases took place in the Philippines, Bangladesh and Nepal before she started as regional director two years ago.

She said the scale of misconduct was "not comparable" to that in Haiti, where Oxfam faces claims staff paid vulnerable people for sex.

Oxfam is meeting the Charity Commission as part of an inquiry by the regulator.

The commission has launched a statutory inquiry into Oxfam - which denies covering up the behaviour of its staff in Haiti after the 2010 earthquake - but details of its scope have not yet been released.

Ms Mercado, who oversees 14 countries, said she was aware of similar cases involving Oxfam workers in Asia between 2009 and 2013.

She said they went largely unreported publicly and had been dealt with internally "according to specified policies", although the situation should not be defined as a "cover up".

But in an interview with the BBC, she said: "Haiti has taught us we need to do a lot more."

She said more effort should be made to alert the authorities and other potential employers about allegations.

"That's a practice that we need to start," Ms Mercado added.

"You know the funny thing about cases like this is that we always see them as reputational risks.

"But the way to manage reputational risk is not to keep silent.. we need to be thinking about the reputation of the sector as a whole."

Her comments come after actress Minnie Driver stood down from her role as a celebrity ambassador for Oxfam.

In a statement the Good Will Hunting and Hope Springs star said she was "nothing short of horrified" by the allegations.

Organisations including Marks & Spencer and the Duke of Edinburgh's (DofE) Award have also said they are considering their association with the charity.

More than 1200 Oxfam donors cancelled their direct debits on Saturday, Sunday and Monday. On average there are 600 cancellations per month.

However, Oxfam said there had been an increase in one-off donations on Tuesday as well as 44 new regular gifts [direct debits] - the highest since March 2017.

International Development Secretary Penny Mordaunt has said she would "not hesitate" to cut government funding to charities that failed to put robust safeguarding measures in place.

At an event in Stockholm to find ways to end violence against children, she said: "No organisation is too big, or our work with them too complex, for me to hesitate to remove funding from them if we cannot trust them to put the beneficiaries of aid first."

Ms Mordaunt, who also spoke to the National Crime Agency (NCA) about the issue, said Oxfam's failure to deal with the actions of some of its staff should be a "wake-up call" to the sector.

The NCA said it had range of powers to investigate allegations abroad and would be considering how it can assist with "international safeguarding considerations".

Since the allegations came to light, Oxfam's deputy chief executive, Penny Lawrence, has resigned over the charity's handling of the misconduct.

In a separate blow for the charity, Oxfam's international chairman, Juan Alberto Fuentes, was arrested in Guatemala as part of a corruption investigation relating to his time as the country's finance minister.

Meanwhile, the Paris-based charity Doctors Without Borders announced it had acted on 24 cases of harassment or sexual abuse last year. It said it had fired 19 employees.