A former student has killed 17 people and wounded at least 14 after opening fire at a Florida High School, police say. 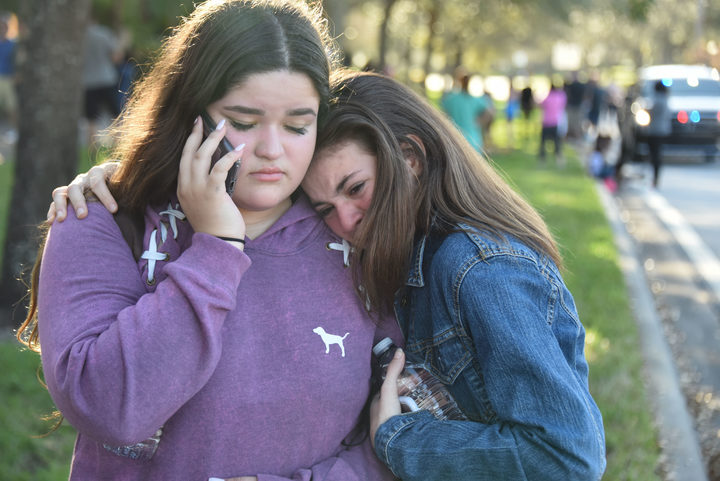 Cruz - who had been expelled from school - was armed with an AR-15 rifle and had "countless magazines".

Police said the attack began outside the school and continued inside.

Twelve of the dead were killed inside the school building, two others just outside, one more on the street and two other victims died of their injuries at a hospital, Mr Israel said. He said the victims included adults as well as students. 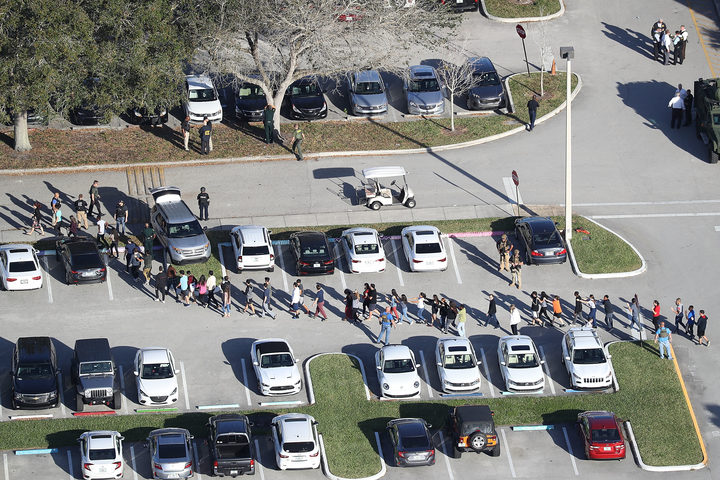 People are brought out of Marjory Stoneman Douglas High School after the shooting at the school that reportedly killed and injured multiple people. Photo: AFP / Joe Raedle / Getty Images

He said the school district had no warning of a potential shooter and that there was no evidence of more than one shooter.

CNN is reporting that the suspect mixed in with students who were trying to get away.

Students hid in classrooms until they were rescued by police in tactical gear, friends and family members said.

One student, Sebastian, described what happened.

"We were all in our classrooms minding our own business and all of a sudden just three shots happened and then everybody just started freaking out.

"We all thought it was a fire drill because we just had one previously today.

"So no one was that nervous but then word started going round that it was shots and not just, like, something else then everyone just started running towards the canal."

Police are working an active shooter scene, and ask that if you are in touch with your student you ask that they remain calm and barricaded until police come to their room, this is for everyone's safety. Do NOT call our 911 or non-emergency number unless it is an emergency.

The sound of gunfire ripped through the air shortly before students were to be dismissed for the day, school officials said on Twitter, adding that multiple people had been injured in the incident.

School officials and police asked parents who were in touch with their children to tell them to remain hidden in classrooms while police searched for the shooter. 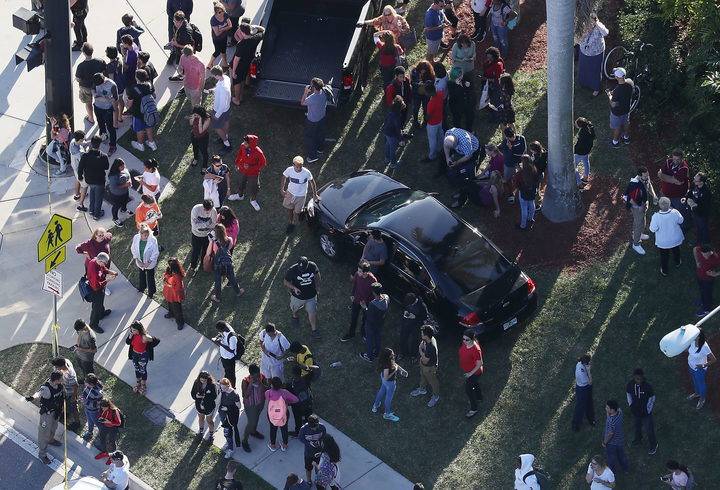 People wait for loved ones as they are brought out of the Marjory Stoneman Douglas High School after the shooting. Photo: Joe Raedle / Getty Images / AFP

"Police are working an active shooter scene, and ask that if you are in touch with your student you ask that they remain calm and barricaded until police come to their room, this is for everyone's safety," Coral Springs police said earlier on Twitter.

AVOID THE AREA - Do not attempt to get to the school this perimeter is LOCKED down. https://t.co/sNtQqZYojL

Panicked parents checked on their children.

"My daughter, as of right now, she's still trapped in a closet. She's afraid to speak," a man who identified himself as Caesar Figueroa and said his daughter was inside the school, told CBS News.

"I told her, 'Don't call me, because I don't want no one to hear your voice.' So, she's still trapped in a closet in there."

Local FOX-10 TV reported five people were seen being treated by paramedics while other students were filing out of the school in a line. 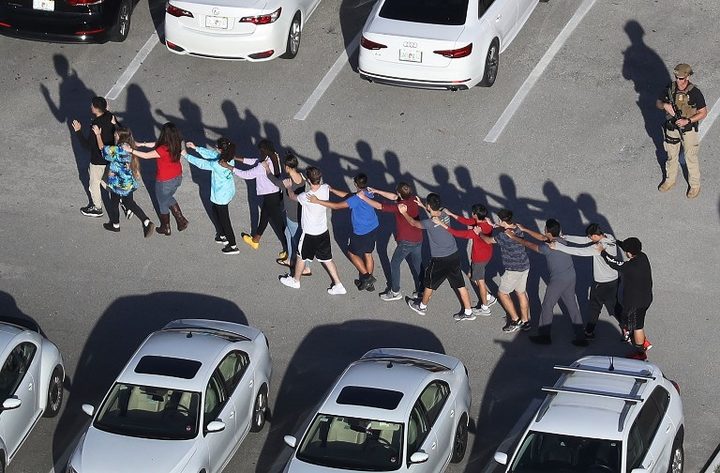 People are brought out of the Marjory Stoneman Douglas High School after a shooting at the school. Photo: AFP / 2018 Getty Images

Live television showed dozens of students running and walking away from the school, weaving their way between law enforcement officers with heavy weapons and helmets, and large numbers of emergency vehicles including police cars, ambulances and fire trucks.

Florida Governor Rick Scott said on Twitter he had been in touch with local officials.

Parkland is about 24km west of Fort Lauderdale in the US state of Florida.

It was the 18th shooting in a US school so far this year, gun control group Everytown for Gun Safety said. That tally includes suicides and incidents when no one was injured, as well as the January incident when a 15-year-old gunman killed two students at a Benton, Kentucky, high school.

More than five years have passed since a gunman killed 20 first graders and six educators in Newtown, Connecticut, stirring the long U.S. debate about gun rights, which are protected by the Second Amendment of the U.S. Constitution.