An unconscious teenage girl was among the seven survivors from a sunken Kiribati ferry rescued last night. 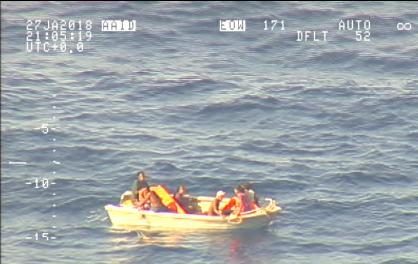 Authorities say six adults and a teenage girl were rescued after drifting for four days in the blazing sun without water.

They scrambled aboard a small wooden dinghy as the ferry with an estimated 50 people on board went under.

The search for the missing Kiribati ferry is to resume at first light this morning.

A New Zealand Defence Force Orion aircraft located the survivors and the fishing boat was diverted to pick them up.

There is no sign as yet of any other survivors.

Imagery that was taken from the @NZAirForce P-3K2 Orion as the fishing vessel picked up the seven survivors from a ferry with 50 people on board that was reported missing in Kiribati a week ago. The Orion crew found the dinghy earlier today: https://t.co/T0kk6obznJ#Force4Good pic.twitter.com/ADGcGa6ivk

He said the Orion is now looking for a liferaft with other survivors and the fishing boat will stay in the area to support the search.

Mr Webb said he remains optimistic that they will find some more survivors.

The Rescue Co-ordination Centre New Zealand started searching for the missing ferry and passengers on Saturday but found nothing.

Mr Webb said the search crew have been out there for a few days now and will be feeling mixed emotions.

Authorities have so far covered 55 percent of the search area.

Kiribati is a remote, impoverished nation of 33 atolls that is home to about 108,000 people.

The journey of 240 kilometres was expected to take two days.

Senior search and rescue officer John Ashby says the ferry was first reported missing to them on Friday.