A 12-hour siege of a luxury hotel by gunmen in the Afghan capital has come to an end, security forces say. 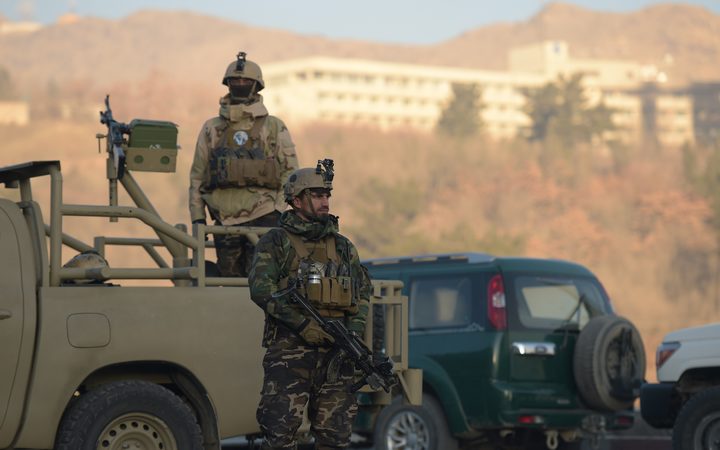 Six civilians, including a foreign woman, died at the Intercontinental Hotel in Kabul, along with three attackers, the interior ministry said.

Some 160 people were rescued after Afghan troops fought through the night to regain control of the building.

Questions are being asked as to how the heavily-armed gang was able to enter such a highly-fortified place.

No group has yet said it was behind the attack, although suspicion will fall on the Taliban who targeted the hotel in 2011.

One Afghan news agency is disputing the authorities' latest information on the siege.

Unconfirmed reports from Tolo News suggest there were five attackers, at least two of whom are still "alive and fighting". It says two foreigners are among the dead and dozens of bodies have been seen inside the hotel.

The gunmen burst into the six-floor hotel at around 21:00 local time on Saturday evening, as guests were enjoying dinner.

Afghan Telecom regional director Aziz Tayeb, who was one of dozens of guests due to attend an IT conference at the hotel on Sunday, said he saw the attackers arrive as he was heading towards the exit.

"Everything became chaotic in a moment," he told the AFP news agency. "I hid behind a pillar and I saw people who were enjoying themselves a second ago screaming and fleeing like crazy, and some of them falling down, hit by bullets."

The gunmen - armed with rocket-propelled grenades as well as smaller weapons - stormed through the hotel taking many of the guests hostage.

During the siege, one guest told AFP they were hiding in their rooms and could hear gunfire coming from "somewhere near the first floor".

Several guests were pictured using bed sheets to try to climb down from a top-floor balcony. One of them lost his grip and fell to the ground.

Afghan special forces were lowered by helicopters on to the roof of the hotel during the night, an interior ministry spokesman said.

Forty-one foreigners were among those rescued. Seven people were wounded.

The interior ministry has promised an investigation into how the attackers breached security, which was handed to a private company two weeks ago.

Some reports suggest the gunmen entered the hotel through a back door in the kitchen.

Saturday's siege comes just days after the US embassy in Kabul issued a warning about hotels in the city.

"We are aware of reports that extremist groups may be planning an attack against hotels in Kabul," the embassy wrote in a public security alert published Thursday, though it highlighted another hotel near the international airport as a possible target.

"These groups may also be targeting public gatherings/demonstrations, government facilities, transportation, markets, and places where foreigners are known to congregate."

The Intercontinental is a state-owned hotel - not linked to the global hotel chain of the same name - which often hosts weddings, conferences and political gatherings.

Security has been tightened in Kabul since last May, when a huge truck bomb killed at least 150 people.

However, there have been several attacks in recent months. They include a bomb at a Shia cultural centre last month that killed more than 40 people.