France's most-celebrated chef Paul Bocuse has died at the age of 91, after suffering from Parkinson's disease for several years. 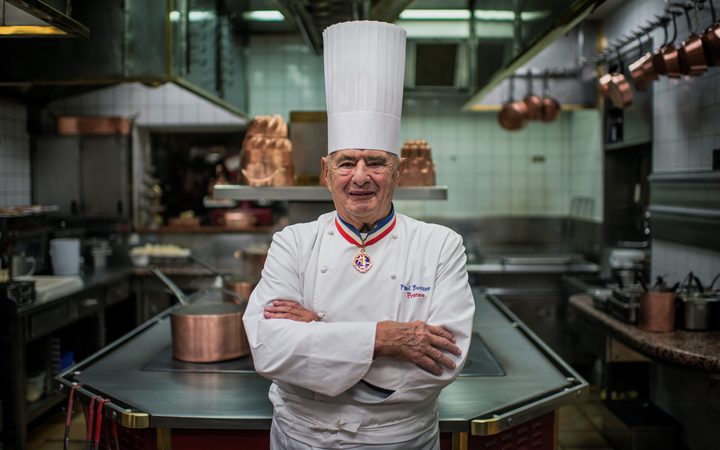 He died in his famous restaurant near Lyon, a local chef close to the family told AFP news agency.

Bocuse rose to fame in the 1970s as a proponent of "nouvelle cuisine", a healthier form of cooking.

"His name alone summed up French gastronomy in its generosity and respect for tradition but also its inventiveness," the French president said.

Chefs across the country would be "crying in their kitchens", he added.

Bocuse's restaurant, L'Auberge du Pont de Collonges, has had three Michelin stars since 1965 and he was named "chef of the century" by Michelin's rival guide, the Gault-Millau, in 1989, and again by the Culinary Institute of America in 2011.

He was also a larger-than-life character who reportedly referred to himself in the third person, told People magazine in 1976 that women were "good cooks, but they are not good chefs" and maintained two long-term extramarital relationships while also having a series of shorter affairs.

He defended his lifestyle in a 2005 interview with the Daily Telegraph.

"A lot is being made about my private life, and why not?" he said.

"I adore women and we live too long these days to spend a whole life with only one. I work as if I will live to be 100, and I enjoy life as if the next day will be my last."

"Mr Paul was France. Simplicity and generosity. Excellence and art of living. The pope of gastronomes leaves us. May our chefs, in Lyon, as in the four corners of the world, long cultivate the fruits of his passion."

Paul Bocuse. A hero to me from my earliest days as a cook. A great, great chef who was very kind to me. To have spent time with him was an honor and a dream come true . Rest In Peace. pic.twitter.com/RxDCZwHhHq

Parisian chef Cyril Lignac expressed gratitude for the "good times spent together, the advice, laughter and guidance, and for elevating our profession to a noble art".