Protesters have taken to the streets of Vienna and called for members of Austria's new right wing government to be boycotted by the rest of Europe. 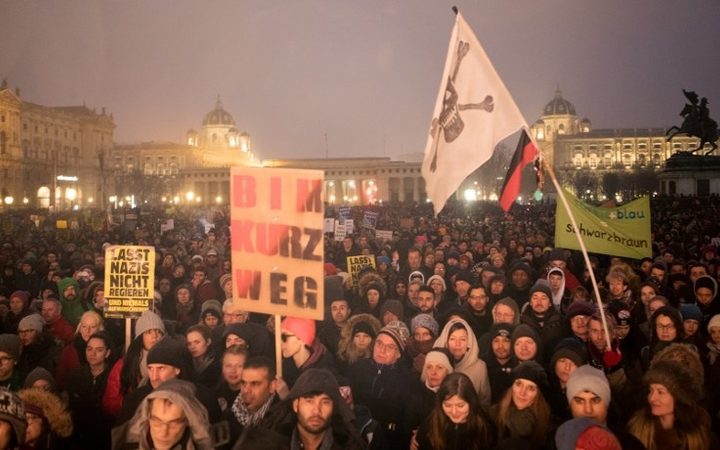 Protesters take part in a demonstration against the current Austrian government at the Heldenplatz in Vienna. Photo: AFP

Around 20,000 people gathered to protest against the new coalition government which includes the far-right Freedom Party (FPO), which was founded by former Nazis.

The demonstrators included students, leftist groups and pensioners who called themselves Grannies Against The Right and others, carrying placards saying "Don't Let Nazis Govern."

Austrian police said up to 1,000 officers were on duty at the event, which they described as peaceful.

The gathering called for a boycott of FPO ministers by other European governments and the shunning of Austria when it takes up the revolving European Union presidency in the second half of 2018.

Last month, the FPO entered government as the junior coalition partner to Chancellor Sebastian Kurz's OVP conservatives after a parliamentary election in which both pledged to stop illegal immigration and to fight radical Islam.

Despite the FPO saying it has left its founders' Nazi past behind and denounces anti-Semitism, its opponents still accuse the party of being racist, sexist and anti-Jewish.

"It is very important that Austrian civil society is mobilised. The FPO are not just populists - they are an enemy of democracy," said Benjamin Abtan, president of the European Grassroots Anti-Racist Movement, who spoke at the event.

"People don't understand that the FPO is not a regular party, they are extremely radical. They should not have a seat at the top tables in Europe."

Abtan cited comments from Interior Minister Herbert Kickl of the FPO, who last week said asylum seekers should be "concentrated" in special centres to help the authorities process their applications swiftly.

The wording evoked Nazi-era concentration camps and triggered a storm of protest in Austria.

Senior FPO figure Norbert Hofer on Saturday told Austrian radio that Kickl's comments were not maliciously or consciously meant, and that human rights would be respected in dealing with asylum seekers.