US Treasury Secretary Steve Mnuchin has said he expects US President Donald Trump to impose new sanctions on Iran. 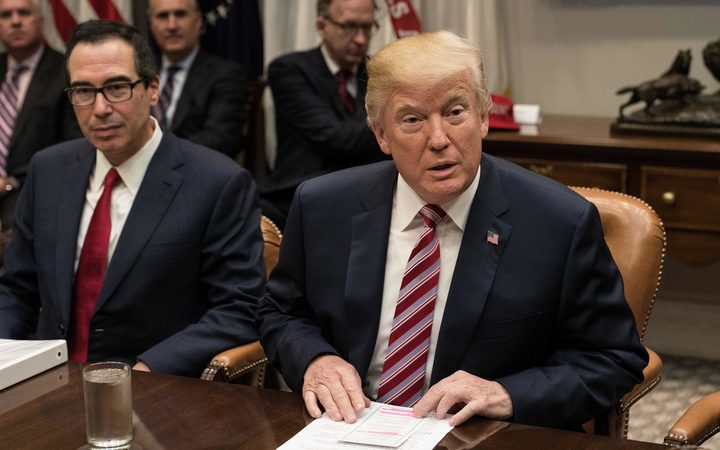 The news comes as Mr Trump faces a Friday deadline to decide whether to waive other major sanctions on Iran lifted under the 2015 nuclear deal.

Mr Trump has criticised the deal, which saw sanctions lifted when Iran agreed to limit its nuclear fuel production.

Mr Mnuchin told reporters he was expecting new sanctions on Iran to be announced - which previous reports have suggested could be targeted measures against Iranian individuals and businesses.

"We continue to look at them. We've rolled them out and I think you can expect there will be more sanctions coming."

The US president says he wants to amend the deal - or withdraw from it completely.

In October, he refused to recertify for Congress that Iran was complying with the deal, accusing it of "not living up to the spirit" of the agreement.

The BBC's Gary O'Donoghue, in Washington, says that while the future of the major sanctions is an open question, the new measures could help the president fend off criticisms from his supporters that he's not fulfilling a key campaign promise to "rip up" the nuclear deal with Iran.

Why does Europe back the deal?

The foreign ministers of Britain, France, Germany and the European Union met their Iranian counterpart Mohammad Javad Zarif in Brussels on Thursday to reaffirm their commitment to the accord, which was also backed by China and Russia.

At a news conference afterwards, representatives of the EU, the UK, France and Germany reiterated their support for the nuclear deal they helped negotiate.

"The deal is working; it is delivering on its main goal, which means keeping the Iranian nuclear programme in check and under close surveillance," EU foreign policy chief Federica Mogherini said.

"The unity of the international community is essential to preserve a deal that is working, that is making the world safer and that is preventing a potential nuclear arms race in the region. And we expect all parties to continue to fully implement this agreement."

Strong consensus in Brussels today: 1)Iran is complying with #JCPOA, 2)Iranian people have every right to all its dividends, 3)any move that undermines JCPOA is unacceptable. E3 and EU fully aware that Iran’s continued compliance conditioned on full compliance by the US. pic.twitter.com/vpib5DQT18

UK Foreign Secretary Boris Johnson insisted the deal was preventing Iran from acquiring nuclear weapons, and challenged Washington to come up with a better alternative.

He described the deal, which is known formally as the Joint Comprehensive Plan of Action (JCPOA), as a "considerable diplomatic accomplishment".

He said the Brussels meeting had shown a "strong consensus" that Iran was complying with the pact, had the right to enjoy its economic benefits and that any move that undermined it was "unacceptable".

What does Mr Trump want to change?

The US president declared in October that the agreement was "one of the worst and most one-sided transactions the United States has ever entered into", and warned that within a few years Iran would be able to "sprint towards a rapid nuclear weapons breakout".

He accused Iran of committing "multiple violations" and promised to work with Congress to "address the deal's many serious flaws".

Mr Trump said they included the deal's "sunset clauses", one of which allows for the lifting of restrictions on Iran's uranium enrichment programme after 2025.

He also wants to give the International Atomic Energy Agency access to Iranian military sites, and for the deal to cover Iran's ballistic missile programme.

Critics of the deal in Congress have also proposed amending legislation to ensure that US sanctions would "snap back" automatically if Iran carried out certain actions.

On Friday, Mr Trump is set to decide whether to extend relief for Iran from some US economic sanctions.

The sanctions, which were suspended in 2016, had cut Iran's central bank out of the international financial system and imposed penalties for buying Iranian oil.

US officials told the Associated Press on Wednesday that Mr Trump was expected to extend the sanctions relief for another 120 days. But they said he might also impose new, targeted sanctions on Iranian businesses and people allegedly involved in missile tests, supporting terrorism, and human rights abuses.

Why is Iran's missile programme controversial?

The US and EU say Iranian ballistic missile tests conducted in the past year have violated UN Security Council resolution 2231, which endorsed the nuclear deal.

The resolution calls upon Iran not to "undertake any activity related to ballistic missiles designed to be capable of delivering nuclear weapons, including launches using such ballistic missile technology".

Iran says the missiles it has tested are not designed to carry nuclear warheads and insists its nuclear programme is entirely peaceful.

The European ministers expressed serious concern about Iran's ballistic missile programme, as well as its alleged transfer of missiles and assistance to non-state entities in the Middle East. But they said the issue should be kept separate from the nuclear deal.