Growing wildfires chewing through parts of Southern California have ravaged avocado farms, racehorse stables and a retirement community, even as milder weather aided firefighters in their efforts to slow the progress of six major blazes. 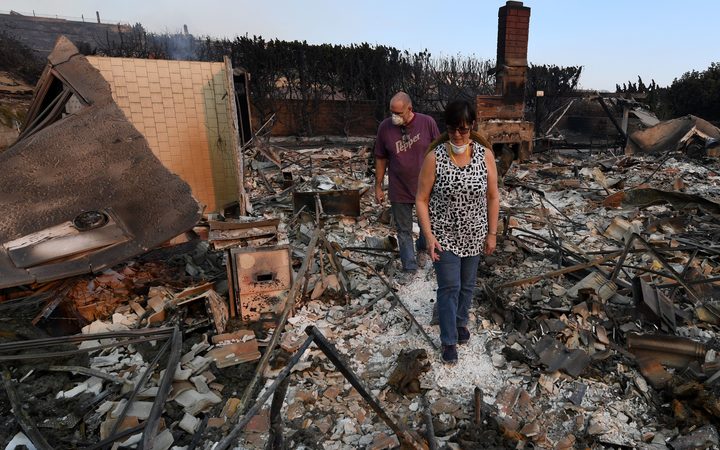 John and Julie Wilson sort through the remnants of their burnt out home after the Thomas wildfire swept through Ventura, California. Photo: AFP

Forecasters predicted weather would continue to challenge the 8,700 firefighters who have been battling fast-moving blazes for five days from the San Diego area up the Pacific Coast to Santa Barbara County.

At the peak, about 212,000 people were forced to flee their homes. Evacuation orders were lifted in some areas, welcome news for many in shelters waiting to see if their homes survived.

"The weather moderated today and the milder winds allowed for an increase in the number of both helicopters and air tankers that could safely complete mission dropping water and fire retardant, as well as conducting reconnaissance tasks," the Ventura County Fire Department said on its website.

A 70-year-old woman died in a car crash on Wednesday with smoke inhalation and burns along an evacuation route in Santa Paula, the Ventura County Star newspaper reported, citing medical examiner Christopher Young.

Two of the most dangerous fires, in Ventura County and San Diego County, were zero to 10 percent contained, the CAL FIRE agency reported. Billions of dollars in property is at risk. 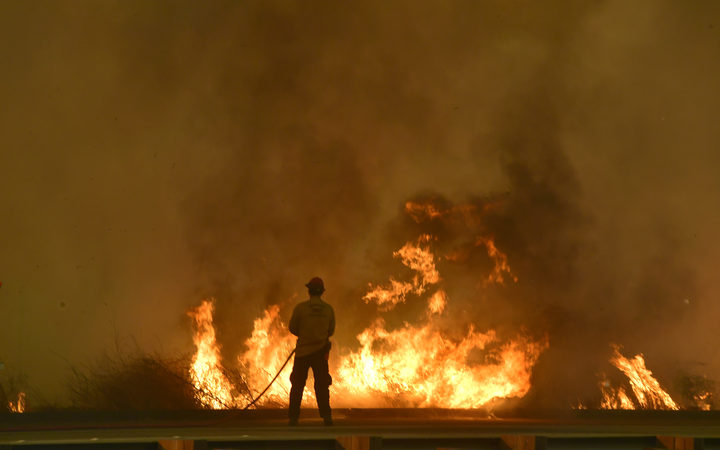 A firefighter battled flames near the US 101 highway in Ventura County. Photo: AFP

A joint weather forecast by firefighting agencies said temperatures would remain "well above normal for the foreseeable future." Winds were expected to continue, peaking in strength on Sunday then becoming much lighter on Monday. Ongoing fires may see significant growth on Sunday," it said.

North of San Diego, the Lilac Fire swelled from 10 acres to 4,100 acres (1,659 hectares) in a few hours on Thursday, prompting Governor Jerry Brown to declare a state of emergency for San Diego County. The fire destroyed 65 structures.

Fallbrook, known for its avocado orchards, burned, and homes were destroyed in its Rancho Monserate Country Club retirement community. Blazes approached the Camp Pendleton marine base.

An estimated 25 to 30 horses died, in addition to 29 horses killed in Los Angeles earlier in the week. A trainer suffered second- and third-degree burns over half her body trying to rescue horses, the newspaper said. She was airlifted to a San Diego hospital and placed in a medically induced coma.

Del Mar Thoroughbred Club, a racetrack in a beachside community north of San Diego, said it was providing refuge for more than 900 animals, mostly horses as well as some goats and pigs. A horse hospital was being opened on Friday.

On Twitter, animal lovers sought to reunite lost dogs with their owners and posted pleas for residents in the Los Angeles area to put out water for wild animals fleeing the fires.

The largest of the blazes, known as the Thomas Fire, was in Ventura County, northwest of Los Angeles, and has charred 57,870 hectares and destroyed 439 structures, officials said. More than 2,600 firefighters from as far away as Portland, Oregon, and Nevada, made progress against the blaze with 10 percent contained, up from 5 percent on Thursday.

The Santa Ana winds, which blow hot and dry across Southern California to the Pacific, eased up on Friday, ranging from 5 miles per hour (8 km per hour) to 35 mph (56 kph). That turned out to be a mixed blessing for firefighters because the lingering smoke limited the use of water-dropping aircraft.

Some 86,000 homes were at risk in the three large fires in Ventura and Los Angeles counties, according to CoreLogic Inc a California-based risk analysis firm, with reconstruction possibly totaling $27.7 billion.

California is still recovering from wildfires in the northern part of the state that resulted in insured losses of more than $9 billion in October. Those fires, which were concentrated in California's wine country, killed 43 people.