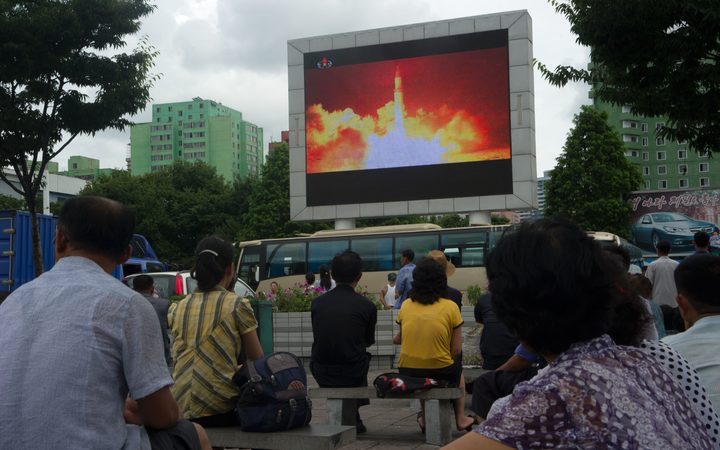 A ballistic missile fired this morning is believed to have landed in Japan's exclusive economic zone.

The missile test is the first in more than two months and comes just over a week after the US labelled Pyongyang as a state sponsor of terror and slapped on tougher sanctions.

"It is incumbent on all of us to continue sending the message that the international community is united in opposition to North Korea's actions. We will continue to do our part, including by fully implementing UN sanctions.

"New Zealand, once again, urges North Korea to abide by its international obligations, refrain from further testing and take steps which can enable international dialogue," he said.

The National Party said this latest launch reinforced North Korea's belligerent attitude in response to the concerns of many countries in the region.

Mr Mattis was speaking at the White House as he briefed President Donald Trump and senior officials on the missile launch.

"It went higher, frankly, than any previous shots they have taken," he said, adding that the North was building "ballistic missiles that threaten everywhere in the world".

Japanese government officials said the missile travelled for about 50 minutes but did not fly over Japan, as some have done in the past.

President Trump was briefed while the missile was still in the air, the White House said. Afterwards he said: "We will take care of it."

South Korea's military said it had responded with a missile exercise of its own.

Condemnation of the launch was swift:

* Britain's ambassador to the UN called it "a reckless act"

The North is thought to be focusing efforts on building long-range missiles with the potential of reaching the mainland continental US.

Officials in Pyongyang said the first of the longer-range missiles it tested in July could hit "any part of the world", but the US military called it an intermediate-range missile instead.

Its last nuclear test reportedly involved a miniaturised hydrogen bomb that could be loaded onto a long-range missile, raising tensions with the US even further.

Last week, President Trump announced that the US was re-designating North Korea a state sponsor of terrorism because of its missile and nuclear programme.

The US imposed fresh sanctions against Pyongyang. The measures targeted North Korean shipping operations and Chinese companies that traded with the North.

North Korea has carried out numerous missile tests this year. Some of these exploded shortly after launch, but others travelled for hundreds of miles before landing in the sea. Here are some of the major tests reported so far:

12 February - A medium-range ballistic missile launched from Banghyon air base near the west coast. It flew east towards the Sea of Japan for about 500km.

4 April - A medium-range ballistic missile fired from the eastern port of Sinpo into the Sea of Japan. South Korea's defence ministry said the missile flew about 60km.

4 July - Pyongyang claimed to have successfully tested an intercontinental ballistic missile for the first time. Officials said it reached an altitude of 2,802km and flew for 39 minutes.

29 August - North Korea fired what is thought to be its first nuclear-weapon capable ballistic missile over Japan. It was launched from near Pyongyang and reached a height of about 550km.

15 September - A ballistic missile was fired across Japan for the second time and landed in the sea off Hokkaido. It reached an altitude of about 770km and travelled 3,700km.