US President Donald Trump said no nation should underestimate American resolve, as he arrived in Japan at the start of a marathon Asian tour. 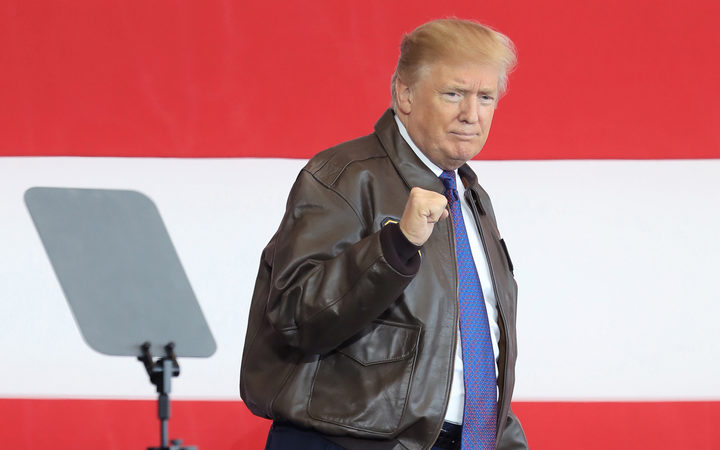 Donald Trump arrives at the US Yokota Air Base in Tokyo Photo: AFP

Addressing US troops at Yokota air base near Tokyo, he pledged to ensure the military had the resources needed to keep peace and defend freedom.

It will be the longest tour of Asia by a US president in 25 years.

"No-one, no dictator, no regime... should underestimate American resolve," Mr Trump told cheering US and Japanese troops shortly after his arrival in Japan.

Before touching down, he told reporters on board Air Force One that he expected to meet Russian President Vladimir Putin during his trip.

"I think it's expected we'll meet with Putin," he said. "We want Putin's help on North Korea."

Mr Trump was meeting Japanese Prime Minister Shinzo Abe for lunch before the two leaders were due to play a round of golf.

Stops in South Korea, China, Vietnam and the Philippines are also on the itinerary in the coming week.

En route to Japan, the president stopped in Hawaii where he visited the USS Arizona Memorial at Pearl Harbor - the scene of the 1941 Japanese attack that drew the US into World War Two.

He also took part in a briefing at the US Pacific Command.

Mr Trump has previously exchanged some fiery rhetoric with North Korea over its ballistic missile tests but aides said earlier this week that he would not go to the heavily fortified demilitarised zone (DMZ) on the border between the South and North.

He is, however, to visit Camp Humphreys, a US military complex south of the capital, Seoul.

In Vietnam, Mr Trump will attend the Asia-Pacific Economic Co-operation summit in Danang and make a state visit to Hanoi.

His final engagement is scheduled to be a summit of South-East Asian nations in the Philippine capital, Manila, on 13 November but the trip has now been extended by an extra day so he can attend the East Asia Summit.

The last time a US president made such a marathon trip to Asia was when George HW Bush visited the region in late 1991 and early 1992.