Footage of a saltwater crocodile suddenly launching from a creek and attacking a tourist has reignited the debate on culling in far north Queensland, Australia. 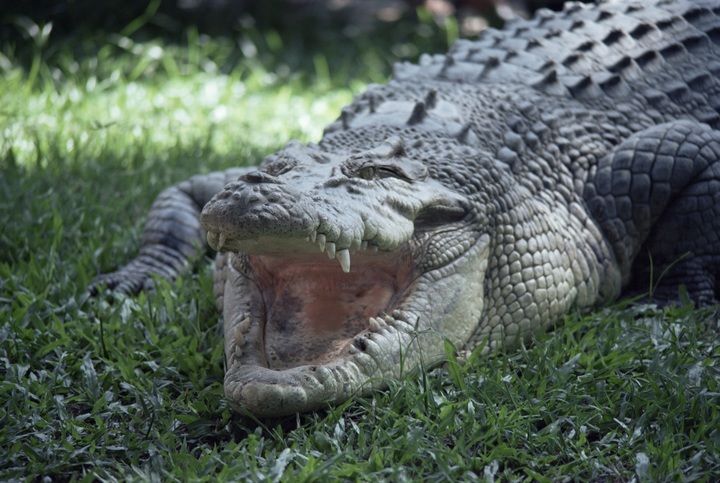 Video of the 2 to 2.5-metre reptile leaping out of the water at Cape Tribulation, injuring a 24-year-old woman, was posted late on Monday by Ally Bullifent.

The Department of Environment and Heritage Protection confirmed a tourist was attacked at a creek in Cape Tribulation.

A Cairns and Hinterland Hospital and Health Service spokeswoman said the woman was treated at Mossman Hospital for lacerations to the left thigh and was discharged overnight.

A video of the attack and a photo of the injury has so far garnered more than 1,840 shares and more than 800 comments.

Outspoken Kennedy MP Bob Katter has responded to the footage, arguing crocodile removal was the answer to prevent injuries and deaths.

"We are trying to track down the people involved [in the Cape Tribulation attack]," he said.

The Department of Environment and Heritage Protection (EHP) confirmed the attack and said it would look at removing the crocodile in question.

"Wildlife officers will carry out a site assessment of the area today and will potentially target the animal for removal."

This means crocodiles displaying dangerous behaviour are targeted for removal.

Cape Tribulation cafe owner and tourism operator Lawrence Mason has lived in the Daintree region all his life and believes more needs to be done to protect tourists from crocodiles.

"My staff have told me the croc has been there for a year," he said.

"It looks like the [tourists] were checking out mud skippers and taking a video of it.

Mr Mason said the video should serve has a wakeup call for all levels of government.

David White, a local tourism operator in the Daintree region and a passionate advocate against crocodile culling, believes education is key to prevent injuries like this.

"We need to educate people on the dangers of being on the beach at night time."

He said tourists were not educated enough about croc safety in the region.

The tourist who posted the footage declined to comment.