Australians have voted in favour of legalising same-sex marriage, with 61.6 percent of respondents to a postal survey voting 'yes'. 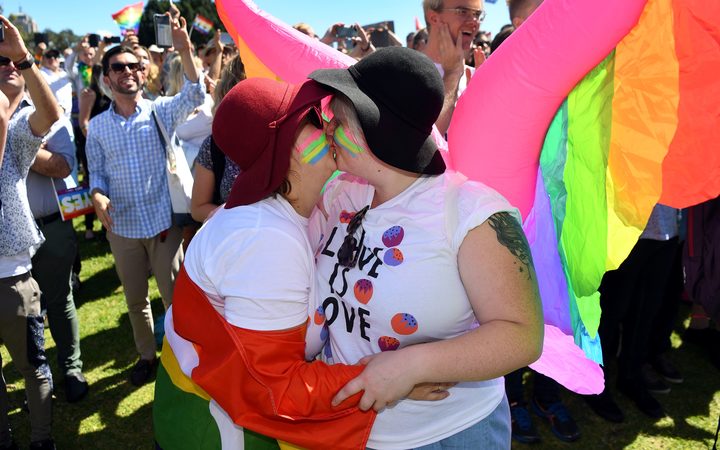 A couple embrace as supporters of the same-sex marriage "Yes" vote celebrate the announcement in a Sydney park. Photo: AFP

The postal referendum was non-binding, but same sex marriage could be legalised in Australia by Christmas if the Turnbull government sticks to its promise to follow up on the result.

The people of Australia have spoken and I intend to make their wish the law of the land by Christmas. This is an overwhelming call for marriage equality. pic.twitter.com/PWZbH5H71r

The process could kick off as early as Thursday, with two bills being presented to the Senate. Australia would become the 26th nation to legalise same-sex marriage.

The final count was 7.8 million responses in support of same-sex marriage, and 4.9 million against. 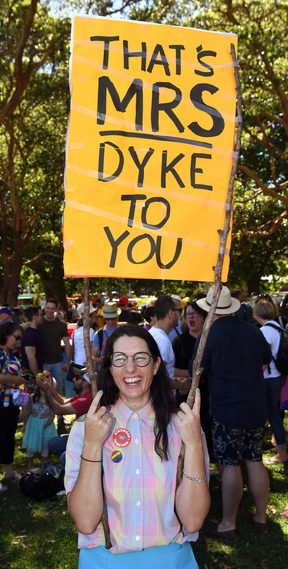 A woman holds a banner as supporters of the same-sex marriage "Yes" vote gather to celebrate the announcement in a Sydney park. Photo: AFP

Every state and territory voted Yes, and only 17 electorates in the whole country voted No.

"They voted yes for fairness, yes for commitment, yes for love. And now it is up to us here in the Parliament of Australia to get on with it, to get on with the job the Australian people have tasked us to do and get this done."

Mr Kalisch noted participation was strong across every state and territory except in the Northern Territory, where only 58.4 percent of eligible people responded.

Participation in the survey was over 70 percent in 146 of the 150 electorates.

"The participation in the survey were slightly higher in older ages and slightly lower in younger age groups but not markedly so," Mr Kalisch said.

"It is worth noting our youngest on the electoral roll, the 18- and 19-year-olds, responded strongly, with around 78 per cent participation."

'They just need to listen to them'

Louisa Wall's member's bill to legalise same-sex marriage was passed in 2013. She said today's result was an emphatic victory for the yes campaign.

After the expensive non-binding postal referendum process, she said she hoped the Australian government would make law changes as soon as possible.

"It's been a $122 million investment in the people of Australia and I would have thought that they just need to listen to them and move as quickly as possible to create the legislation that enables marriage equality."

Ms Wall said New Zealand's marriage equality law was simple, defining marriage as between two consenting adults and that the state's role in that process was to issue a marriage licence.

She said that New Zealand's law had also allowed celebrants and religious ministers to decline to solemnise marriages, if it went against their beliefs around marriage.

Ms Wall said she would be happy to help if Australia requested input in drafting a law.

She also said that New Zealand has had no problems in implementing the marriage equality law.

Shelley Argent from the Australian chapter of the organisation Parents, Family and Friends of Lesbians and Gays told Jesse Mulligan it was a "very good day".

"I'm just so excited that we did actually win this, because there was great concern and great stress in the LGBT community that we may not win. But we have, and that's important."

But she said winning had been the easy part.

"Now we have to go through all of the nonsense with the religious right and their exemptions and such. We were told that this was democracy in action, so let's hope the outcome id democratic, which means the winner wins." 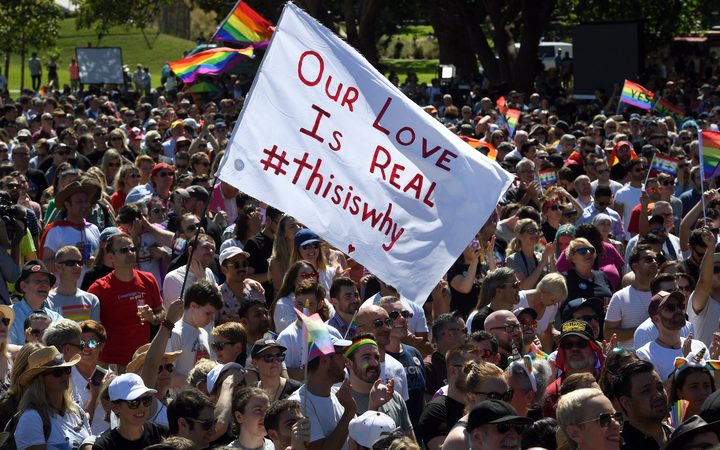 There were scenes of jubilation at Yes campaign parties across the country, including inside Parliament House.

Labor's leader in the Senate Penny Wong was moved to tears.

The news also sparked a huge reaction on social media:

The crowd at the official Yes event has just heard the news @abcnews @abcsydney pic.twitter.com/HO4sVJAlkb

A long time coming. This is for all of us. ️‍ #MarriageEquality pic.twitter.com/jN5OfuNtZT

Oh my darlings! Each and everyone of you are loved and valued and I’m so sorry you had to go through this awful thing.
❤️❤️❤️YES YES YES YES YES YES ❤️❤️❤️#YES #MarriageEquality #SSM2017

The Coalition will now need to decide on the bill that is brought forward to the Parliament.

Mr Turnbull has already nominated a bill drafted by openly gay Liberal senator Dean Smith as a good starting point, but conservatives in the party have locked in behind an alternative suggested by James Paterson, arguing it contains much stronger religious protections.

"Whatever the result today, it is not going to be a rejection or vindication one way or another of the Dean Smith bill. It was not put forward to the Australian people as the option," Cabinet minister Matt Canavan said ahead of the result.

The Prime Minister has said Senator Paterson's bill would discriminate against gay couples and would not have a chance of passing Parliament.

Mathias Cormann, who is aligned with the right of the party, has indicated he would push for more religious protections than are allowed for in Senator Smith's bill.

"The Parliament over the next few weeks will need to determine the right balance in terms of the appropriate religious protections," he said.

"We are very confident that that debate will be able to take place constructively through the Senate and through the House of Representatives and for this to be resolved by the end of the year."