The soldier was shot and injured by his own military as he crossed to the South Korean side of the Joint Security Area in the village of Panmunjom.

The defector has been taken to hospital.

About 1,000 people from the North flee to the South each year - but very few defect via the DMZ. 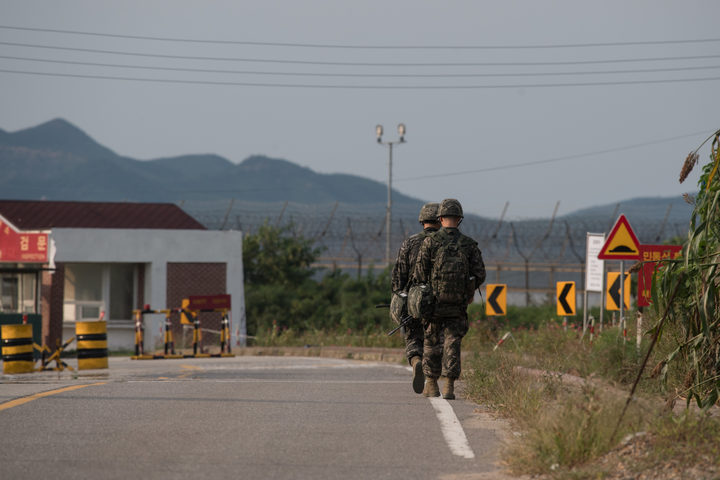 This is the fourth defection by a North Korean soldier via the DMZ - one of the world's most heavily guarded strips of land - in the last three years.

North and South Korea are technically still at war, since the conflict between them ended in 1953 with a truce and not a formal peace treaty.

According to a statement from South Korea's Joint Chiefs of Staff, the soldier made it across by passing through the Joint Security Area (JSA) at Panmunjom, which is the only portion of the Demilitarised Zone where both forces stand face-to-face.

"He crossed from a North Korea post towards our Freedom House [a building on the South Korean side of the border]," the statement said. He was hit in the arm and shoulder by gunfire, it added.

According to South Korean media this is only the third defection across the JSA since the end of the Cold War, the BBC's Mark Lowen in Seoul reports. The last time a soldier crossed was in 2007, and before that in 1998.

The fall is believed to be a result of tighter government surveillance and reinforced border security by both North Korea and China.

The majority of the defectors flee via China, which has the longest border with North Korea that is easier to cross than the heavily protected DMZ.

Seoul says more than 30,000 North Koreans have defected to the South since the end of the Korean War in 1953.