A Pentagon assessment has declared the only way to completely destroy all parts of North Korea's nuclear weapons programme is through a ground invasion.

Rear Admiral Michael Dumont expressed the opinion on behalf of the Joint Chiefs of Staff in a letter to Congressman Ted Lieu. 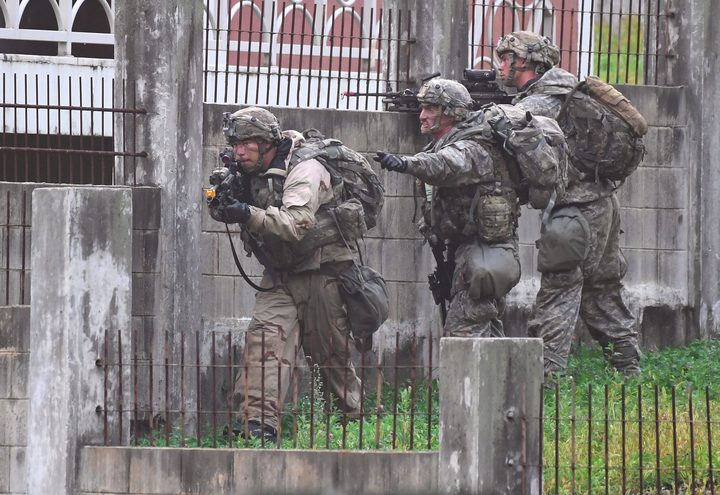 US soldiers participate in a South Korea-US combined arms collective training exercise at the US army's Rodriguez shooting range in Pocheon, about 70 km northeast of Seoul near the heavily-fortified border with North Korea on September 19, 2017. Photo: AFP

He also gave some detail on what the first hours of a war would involve.

"The only way to 'locate and destroy - with complete certainty - all components of North Korea's nuclear weapons programs' is through a ground invasion," he wrote in response to Congressman Lieu's questions about a potential conflict.

The risks involved included a potential nuclear counter-attack by North Korea while US forces attempted to disable its "deeply buried, underground facilities", he said.

"A classified briefing is the best venue for a detailed discussion," he added.

The Joint Chiefs of Staff directly advise the president of the United States on military matters.

In a statement with more than a dozen other military veterans turned congressmen, Mr Lieu, a Democrat, said the assessment was "deeply disturbing" and warned that a conflict "could result in hundreds of thousands, or even millions of deaths in just the first few days of fighting."

"Their assessment underscores what we've known all along: there are no good military options for North Korea," the statement said.

The letter was published as Donald Trump begins his mammoth tour of Asia, during which the North Korean threat is expected to be a major topic of discussion.

The president has previously said that if forced to defend the US or its allies, he "will have no choice but to totally destroy North Korea."

Rear Admiral Dumont opened his letter with a clear indication that his office supported economic and diplomatic solutions ahead of any military action.

Potential casualties from a conflict depended heavily on the intensity of any attack on South Korea's capital, Seoul, which lies just 35 miles (56 km) from the border, as well as how much advance warning the US and its allies had, he said.

He said a counter-offensive from artillery battery fire and air strikes might help limit casualties.

The Joint Chiefs also fear that Pyongyang would use biological weapons in a conflict, despite international conventions banning their use, as well as chemical weapons - which it has never agreed to abandon.

"It likely possesses a [chemical weapons] stockpile," the letter said.

The assessment by military chiefs follows the release of a report from the non-partisan Congressional Research Service, which warned that even a brief conflict without the use of banned weapons could cost tens of thousands of lives.