The leader of Lebanon's Hezbollah has accused Saudi Arabia of declaring war on his country, days after Lebanese PM Saad al-Hariri announced his resignation in the Saudi capital. 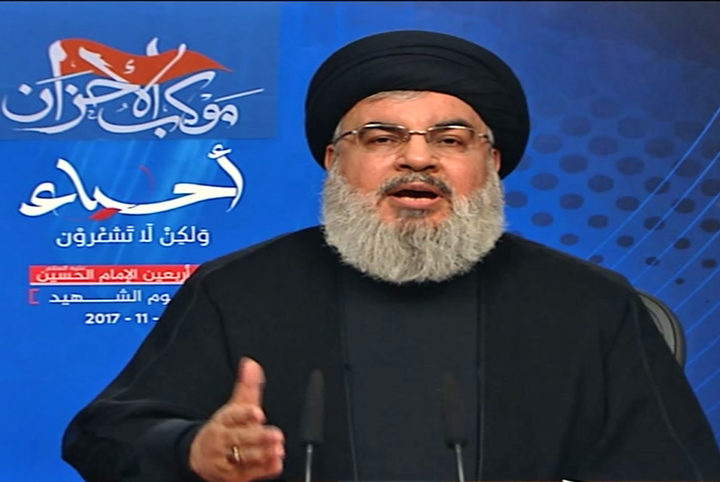 Hassan Nasrallah said Saudi Arabia was holding Mr Hariri against his will.

He also accused the Saudis of inciting Israel against Lebanon.

The powerful Hezbollah Shia movement is an ally of Iran, which has been trading accusations with the Saudis of fuelling tension in Lebanon and the region.

Mr Hariri said in a TV broadcast from Riyadh on Saturday he was stepping down because of an unspecified threat to his life. He also attacked Hezbollah and Iran.

However, Lebanese President Michel Aoun and other senior politicians have demanded his return, amid suspicions that he is being held by the Saudis under house arrest and forced to do their bidding.

Mr Hariri has still not spoken publicly since his announcement.

What did the Hezbollah leader say?

In a televised speech on Friday, Mr Nasrallah said Saudi Arabia was trying to provoke fighting amongst the Lebanese.

"In short, it is clear that Saudi Arabia and Saudi officials have declared war on Lebanon and on Hezbollah in Lebanon, but I have to say this is a war on Lebanon," he said.

Mr Nasrallah also accused Saudi Arabia of being prepared to pay "billions" to Israel for a military strike against Lebanon, describing this as the "most dangerous thing".

At the weekend the Hezbollah leader had said that Mr Hariri had been forced to resign by the Saudis, but he repeated the allegations on Friday, saying that this was now "beyond any doubt".

Saudi Arabia was attempting to remove Mr Hariri as prime minister and impose a new leadership on his political movement, he said.

BBC Middle East editor Sebastian Usher said Mr Nasrallah's words were delivered as calmly as ever - but they would inevitably raise the temperature further as a growing number of countries outside the region try to calm the crisis.

There are fears Lebanon could become embroiled in a wider regional confrontation between Saudi Arabia and Iran.

Tensions between the three countries have soared since Mr Hariri announced his resignation.

But US Secretary of State Rex Tillerson warned against Lebanon being used for a proxy conflict, adding that the US strongly backed Lebanon's independence.

UN Secretary General Antonio Guterres warned that a new conflict in the region would have "devastating consequences".

On Thursday, French President Emmanuel Macron paid an unscheduled visit to Saudi Arabia, to emphasise to Saudi leaders the importance of stability in Lebanon.

France has historical ties with Lebanon, as its former colonial power before it gained independence during World War II.

Earlier on Thursday, Saudi Arabia and its Gulf allies told their citizens in Lebanon to leave the country immediately.

The move came after Riyadh accused Iran of "direct military aggression", saying it supplied a missile which it says was fired by Hezbollah at Riyadh from Yemen on Saturday.

Iran has dismissed the Saudi allegations as "false and dangerous".