Saudi Arabia's attorney general says at least $US100bn has been misused through systemic corruption and embezzlement in recent decades. 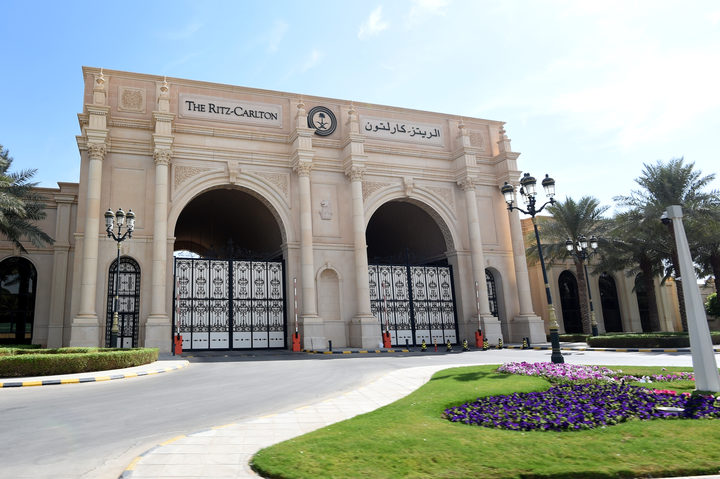 The closed gate of Riyadh's five-star Ritz-Carlton hotel, where some of those being questioned are believed to be detained. Photo: AFP

Sheikh Saud al-Mojeb said 201 people were being held for questioning as part of a sweeping anti-corruption drive that began on Saturday night.

He did not name any of them, but they reportedly include senior princes, ministers and influential businessmen.

"The evidence for this wrongdoing is very strong," Sheikh Mojeb said.

He also stressed that normal commercial activity in the kingdom had not been affected by the crackdown, and that only personal bank accounts had been frozen.

He announced that 208 individuals had been called in for questioning so far, and that seven of them had been released without charge.

"The potential scale of corrupt practices which have been uncovered is very large," the attorney general said. "Based on our investigations over the past three years, we estimate that at least $100bn has been misused through systematic corruption and embezzlement over several decades."

Sheikh Mojeb said the committee had a clear legal mandate to move on to the next phase of its investigation and that it had suspended the bank accounts of "persons of interest" on Tuesday.

Among those reportedly detained are the billionaire investor Prince Alwaleed bin Talal; Prince Miteb bin Abdullah, a son of the late king who was also removed from his post as National Guard chief on Saturday; and his brother Prince Turki bin Abdullah, a former governor of Riyadh province.

Others are said to include Alwalid al-Ibrahim, owner of the television network MBC; Amr al-Dabbagh, former head of the Saudi Arabian General Investment Authority; Khalid al-Tuwaijri, former chief of the Royal Court; and Bakr Binladen, chairman of the Saudi Binladen Group.

At least some of them are believed to be held at the five-star Ritz-Carlton hotel in Riyadh's diplomatic quarter. Paying guests were asked to vacate their rooms late on Saturday and the hotel's exterior gate has been shuttered since Sunday.

On Tuesday, the US said it had urged the Saudi government to handle any prosecutions stemming from the probe in a "fair and transparent" manner.

Human Rights Watch meanwhile called on Saudi officials to "immediately reveal the legal and evidentiary basis for each person's detention and make certain that each person detained can exercise their due process rights".

The detentions follow a wave of other recent arrests of clerics, human rights activists and intellectuals, for which the authorities have not given specific reasons.