The death toll from the typhoon that's pummelling central and southern Vietnam has risen to 27, just days before the country welcomes world leaders to the APEC summit. 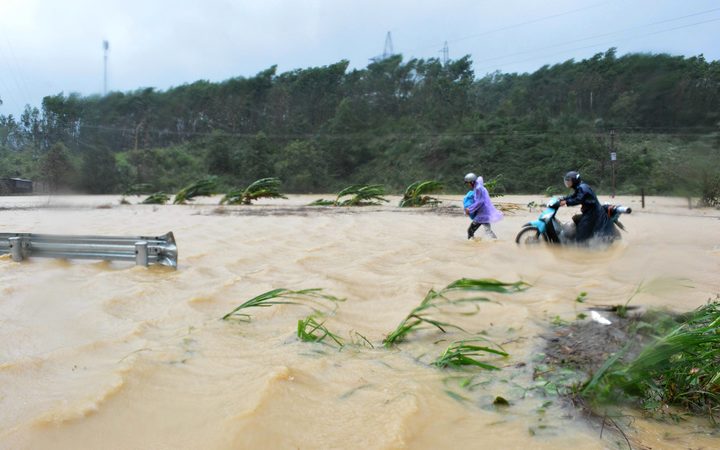 Walking through floodwaters on a highway in the central province of Dak Lak brought by Typhoon Damrey. Photo: AFP

Typhoon Damrey, the twelfth major storm to hit Vietnam this year, made landfall yesterday with winds of up to 90kmh that damaged more than 40,000 homes, knocked down electricity poles and uprooted trees.

The communist state's Steering Committee for Disaster Prevention said 27 people were now dead and 22 were missing. It said 626 houses had collapsed entirely. More than 30,000 people have been evacuated.

The heaviest impact of the typhoon was near the city of Nha Trang, which is around 500km south of the coastal city of Danang, where the Asia-Pacific Economic Co-operation (APEC) summit is taking place this week.

Danang itself also suffered. A gateway proclaiming 'Welcome to Danang' collapsed in the storm, state media said. Authorities in the area called on citizens to volunteer to help clean up.

Danang will host US President Donald Trump from Friday, as well as China's Xi Jinping, Russia's Vladimir Putin and counterparts from other APEC members.

The government said yesterday more than 40,000 hectares of crops had been damaged, including sugar cane, rice fields and rubber plantations.

Floods killed more than 80 people in northern Vietnam last month, while a typhoon wreaked havoc in central provinces in September.