At least 350,000 people gathered in Barcelona, capital of Catalonia, for a rally against independence from Spain. 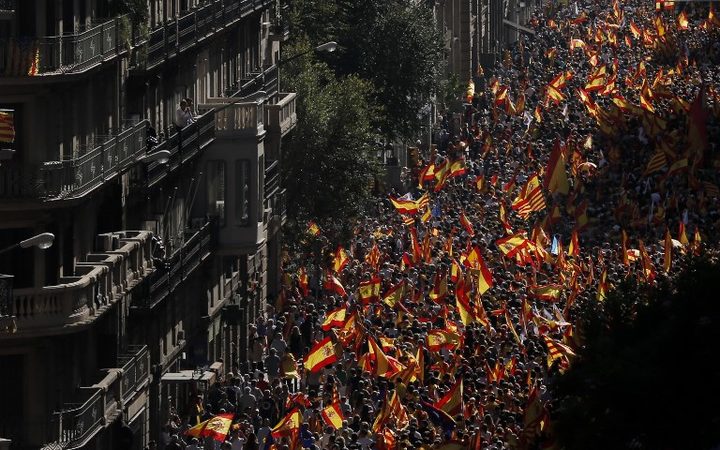 A huge demonstration to support the unity of Spain, on Sunday in Barcelona. Photo: AFP / PAU BARRENA

Organisers put the crowd size at almost one million people while police in Barcelona said the crowd was 350,000 people.

Similar rallies were held across Spain at the weekend.

On Saturday, thousands of people calling for Spanish unity attended rallies in the capital Madrid. Sunday's rally in Barcelona was the largest such rally in Catalonia amid speculation that Catalan leaders will declare independence from Spain. 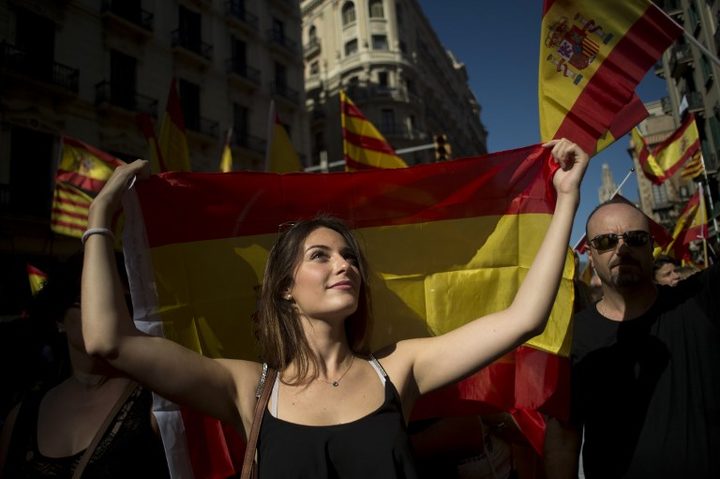 In Barcelona, people waved Spanish and Catalan flags and carried banners saying "Together we are stronger" and "Catalonia is Spain".

Spanish PM Mariano Rajoy has warned he would not rule out anything "within the law" to halt Catalonian independence.

The final results from last week's disputed referendum in the wealthy north-eastern region suggested 90 percent of the 2.3 million people who voted backed independence. Turnout was 43 percent.

There have been several claims of irregularities, and many ballot boxes were seized by Spanish police.

Nearly 900 people were injured as the police, trying to enforce a Spanish court ban on the vote, attempted to disperse voters.

Among them were former government minister Josep Borrell, who said his fellow Catalans needed to recover their level-headedness, and nobel laureate Mario Vargas Llosa.

"You need more than a coup plot to destroy what has been built over 500 years of history," Vargas Llosa, the Peruvian-Spanish novelist, told the crowds.

One of those attending the rally was 72-year-old Araceli Ponze.

She told Reuters: "We feel both Catalan and Spanish.

"We are facing a tremendous unknown. We will see what happens this week but we have to speak out very loudly so they know what we want."

Similar unity rallies were held across Spain on Saturday.

Catalan President Carles Puigdemont is expected to address the regional parliament on Tuesday. Spain's Constitutional Court suspended a Catalan parliament session that had been planned for Monday.

There is speculation that the parliament will declare independence unilaterally at its next sitting.

In an interview with El País newspaper, Spain's prime minister retained the tough line he and his government have taken over the referendum.

"The government will ensure that any declaration of independence will lead to nothing," Mariano Rajoy said.

He also said he planned to keep extra police, deployed to Catalonia before the referendum, in the region until the crisis is over.

And he rejected calls for early national elections.