Analysis - Catalonia's separatist government has staged a referendum on leaving Spain - against the wishes of the national authorities. 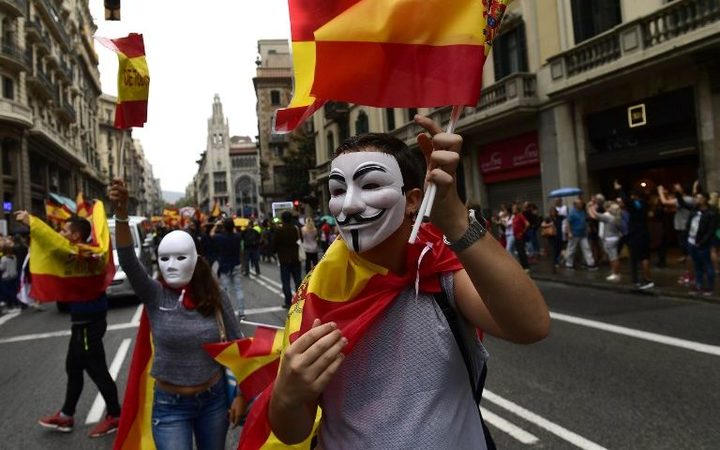 A man wearing a 'Guy Fawkes' mask holds a Spanish flag during a demonstration in Barcelona against independence in Catalonia. Photo: AFP

With a population of 7.5 million, its capital is the proud city of Barcelona.

The Spanish leadership has rejected the vote as illegal and the courts have ordered a halt. Spanish police have arrested senior Catalan officials, seized ballots and raided key regional buildings, as well as polling stations, in an attempt to stop it going ahead.

Catalans have taken to the streets in protest. So what has stirred this hunger for independence - and could it happen? 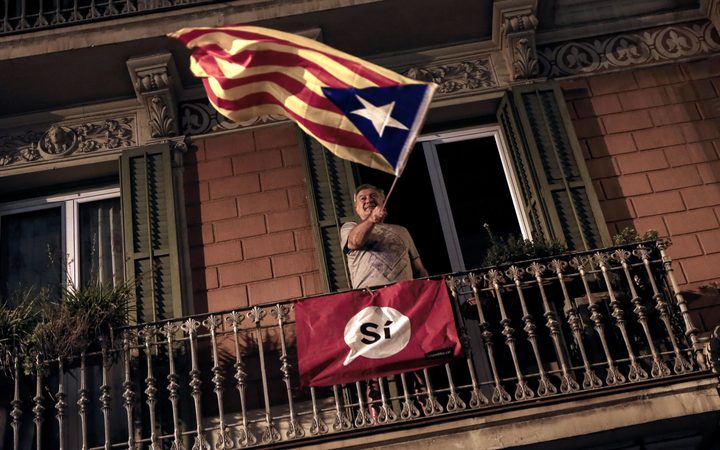 A man waves a pro-independence Catalan flag after the close of polling. Photo: AFP

Catalonia is one of Spain's wealthiest and most productive regions and has a distinct history dating back almost 1000 years. Before the Spanish Civil War it enjoyed broad autonomy but that was suppressed under decades of Gen Francisco Franco's dictatorship from 1939-75.

When Franco died, Catalan nationalism was revived and eventually the northeastern region was granted autonomy again, under the 1978 constitution.

A 2006 statute granted even greater powers, boosting Catalonia's financial clout and describing it as a "nation", but Spain's Constitutional Court reversed much of this in 2010, to the anger of the regional authorities. 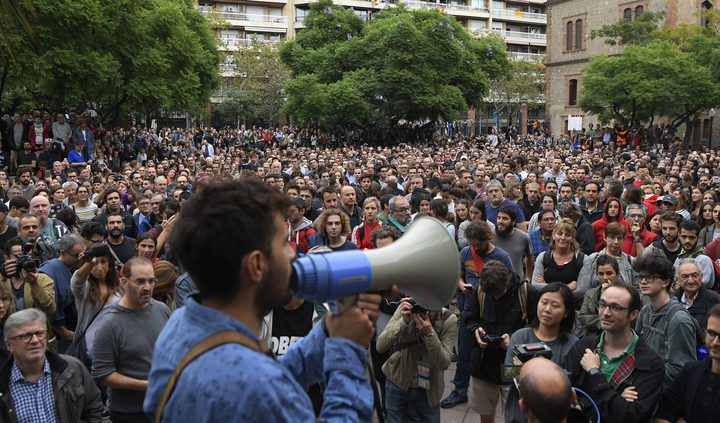 People listen to a referendum volunteer giving instructions on how to behave in case of a police intervention outside a polling station in Barcelona. Photo: AFP

Angered by having their autonomy watered down as well as by years of recession and cuts in public spending, Catalans held an unofficial vote on independence in November 2014. More than two million of the region's 5.4 million eligible voters took part and officials declared that 80 percent had backed secession.

Separatists won Catalonia's election in 2015 and set to work on holding a binding referendum, defying Spain's constitution, which states that Spain is indivisible.

The Catalan parliament enacted its own law in a vote on 6 September. There was just one question on the ballot paper - 'Do you want Catalonia to become an independent state in the form of a republic?'

And there were two boxes: Yes or No.

Under the controversial law, the result is binding and independence must be declared by parliament within two days of the Catalan electoral commission proclaiming the results.

Catalan President Carles Puigdemont insisted that "no other court or political body" could suspend his government from power.

The reaction from Madrid? Prime Minister Mariano Rajoy condemned the vote as illegal: "I say this both calmly and firmly: there will be no referendum, it won't happen."

Acting at Mr Rajoy's request, the Constitutional Court suspended the law passed by the Catalans. The Spanish government also moved to take control of the region's finances and policing.

Catalan officials involved in organising the vote were arrested, some 10 million ballot papers impounded, and websites informing Catalans about the election were shut down.

Catalonia's own police force, the Mossos d'Esquadra, was ordered to accept the command of Spain's paramilitary Civil Guard to stop the vote taking place.

"Spain has de facto suspended the self-government of Catalonia and has applied a de facto state of emergency," President Carles Puigdemont has complained.

Voting did take place in some form in some areas, but more than 400 people were injured when police used force to try to stop the referendum. The national authorities had brought in 4000 police from outside Catalonia to help thousands of local Mossos police and national officers to keep security and stop the vote.

Parties loyal to Spain who won about 40 percent in the 2015 Catalan election boycotted it, so the No vote is likely to be tiny and hugely unrepresentative. And yet, it will be hard for Madrid to deny Catalan secessionists have a case if there is a strong turnout.

Pro-independence supporters have certainly produced large-scale demonstrations in favour of secession. One million people turned out in Barcelona for the national day on 11 September.

We know that 2.2 million voters backed independence in the previous vote in November 2014, and that coalition of separatist parties called Junts pel Si (Together for Yes), with the support of a radical left-wing party, the CUP, won 48 percent of the vote in 2015 elections.

There was a sense that support for independence may have been ebbing, but the hardline strategy of the Spanish authorities to stop the vote going ahead may equally have re-energised backing for the vote itself to take place.

Does Catalonia have a good claim to nationhood?

It is certainly long-lived. It has its own language, a recorded history of more than 1000 years as a distinct region, and a population nearly as big as Switzerland's (7.5 million).

It also happens to be a vital part of the Spanish state, locked in since the 15th Century, and - according to supporters of independence - subjected periodically to repressive campaigns to make it "more Spanish".

Barcelona has become one of the EU's best-loved cities, famed for its 1992 Summer Olympics, trade fairs, football and tourism.

It is one of Spain's wealthiest regions, making up 16 percent of the national population and accounting for almost 19 percent of Spanish GDP. But there is a widespread feeling that the central government takes much more than it gives back.

It does appear to take more than it gives - though the complexity of budget transfers makes it hard to judge exactly how much more Catalans contribute in taxes than they get back from investment in services such as schools and hospitals.