Spanish national police moved to shut down a banned independence referendum in Catalonia, confronting crowds of angry voters at some polling stations in a showdown that has raised fears of unrest across the wealthy north-eastern region. 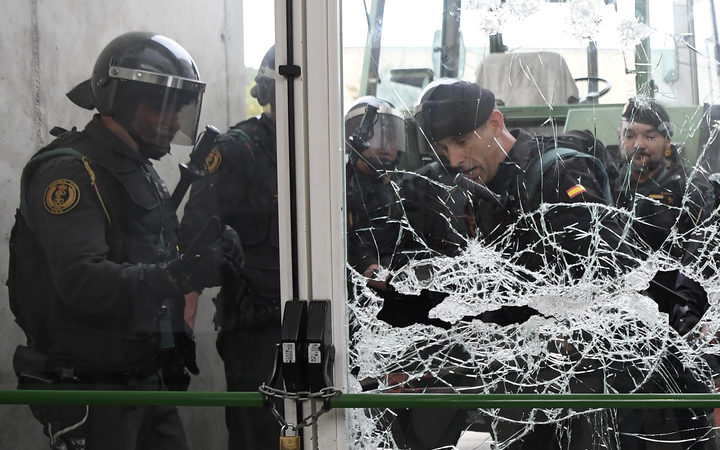 Police with riot shields jostled with hundreds of voters outside one station at a school in Barcelona, the Catalan capital, as the crowd chanted "we are people of peace!". Armoured vans and an ambulance were parked nearby.

The referendum, declared illegal by Spain's central government, has thrown the country into its worst constitutional crisis in decades and raised fears of street violence as a test of will between Madrid and Barcelona plays out.

The Catalan government had scheduled voting to open at 9am at around 2300 designated stations, but Madrid said on Saturday it had shut more than half of them.

Voting started at some sites in the region on Sunday after people had occupied them with the aim of preventing police from locking them down. Organisers smuggled in ballot boxes before dawn and urged voters to use passive resistance against police.

Catalan leaders vowed to press ahead with the vote despite Spanish attempts to thwart preparations, including the seizure of ballot papers and boxes, and it said it would give an estimate of the early turn-out later in the morning.

The Catalan government said voters could print out ballot papers at home and lodge them at any polling station not closed down by police.

"I have got up early because my country needs me," said Eulalia Espinal, a 65-year-old pensioner who started queuing with around 100 others outside one polling station, a Barcelona school, in rain at about 5am.

"We don't know what's going to happen but we have to be here," she said. 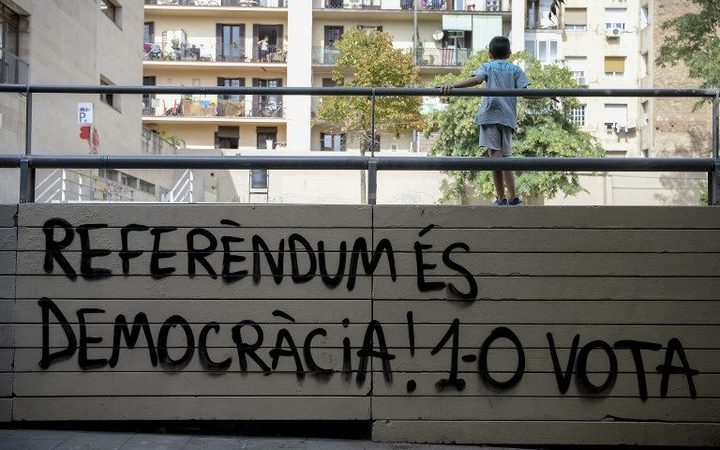 A child stands over a graffiti reading in Catalan "Referendum is democracy! 1-O (October 1) do vote" in Barcelona Photo: AFP

Organisers had asked voters to turn out before dawn, hoping for large crowds to be the world's first image of voting day.

"This is a great opportunity. I've waited 80 years for this," said Ramon Jordana, 92, a former taxi driver waiting to vote in Sant Pere de Torello, a town in the foothills of the Pyrenees and a pro-independence bastion.

He had wrapped his wrists in Catalan flags, among 100-150 people who gathered at a local school that had been listed as a polling station, ready to block any police from entering. A tractor also stood guard, though no police had yet arrived.

But Catalan leaders urged voters to turn out in a peaceful expression of democracy. Families have occupied scores of schools earmarked as voting centres, sleeping overnight in an attempt to prevent police from sealing them off.

If some voting goes ahead, a "yes" result is likely, given that many unionists are not expected to turn out.

"If I can't vote, I want to turn out in the streets and say sincerely that we want to vote," said independence supporter Jose Miro, a 60-year-old schools inspector.

Only the Catalan police, or Mossos d'Esquadra, had so far been monitoring polling stations. They are held in affection by Catalans, especially after they hunted down Islamists accused of staging deadly attacks in the region in August.

Pro-independence Catalan leader Carles Puigdemont originally said that if the "yes" vote won, the Catalan government would declare independence within 48 hours, but regional leaders have since acknowledged Madrid's crackdown has undermined the vote.

Markets have reacted cautiously but calmly to the situation so far, though credit rating agency S&P said on Friday that protracted tensions in Catalonia could hurt Spain's economic outlook. The region accounts for about a fifth of the economy.

The ballot will have no legal status as it has been blocked by Spain's Constitutional Court, and Madrid has the ultimate power under its 1978 charter to suspend the regional government's authority to rule if it declares independence.

The Madrid government, which has sent thousands of police to Catalonia to enforce a court ban on the vote, believes it has done enough to prevent any meaningful referendum taking place.

A minority of around 40 percent of Catalans support independence, polls show, although a majority want to hold a referendum on the issue. The region of 7.5 million people has an economy larger than that of Portugal.