Clark County Sheriff Joseph Lombardo, who is investigating the Las Vegas shooting, has said he finds it hard to believe the man assembled his arsenal completely on his own. 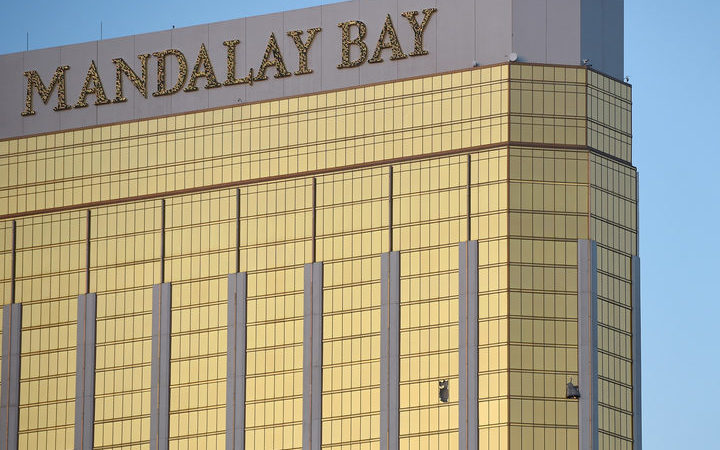 The gunman smashed the windows of his hotel room to carry out his attack. Photo: AFP

It is not yet known why Stephen Paddock opened fire on an open air concert from the Mandalay Bay Hotel overlooking the venue, killing 58 people in the most deadly shooting in modern US history.

He took his own life before police stormed the room.

Mr Lombardo told reporters he found it hard to believe that the weapons, ammunition and explosives recovered by police in their investigation could have been assembled by Paddock completely on his own.

In a press conference today, Mr Lombardo said police had found more explosives in Paddock's car at the hotel, along with about 1600 rounds of ammunition.

"What we know is that Stephen Paddock is a man who spent decades acquiring weapons and ammo and living a secret life, much of which will never be fully understood," the sheriff said.

"You have to make an assumption that he had some help at some point," Lombardo said at a news briefing. Lombardo said the attack was the obvious outcome of meticulous planning.

He said Paddock had been gambling just hours before he began shooting, and had booked into the Ogden Hotel overlooking a different open air festival in Las Vegas a week earlier.

But he said Paddock's motivations and whether there were any possible accomplices remained a mystery. The FBI has said so far no link to terrorism had been found.

"We don't understand it yet," Sheriff Lombardo told reporters.

Mr Lombardo also gave a timeline of the police response during the attack:

Mr Lombardo also said Paddock had fired 200 rounds of ammunition at the door and hallway after officers approached.

Police said he may have been planning to escape instead of shooting himself dead, but did not give further details.

Girlfriend 'I loved him and hoped for a quiet future together

Earlier, Paddock's girlfriend Marilou Danley has said she had no idea what her "kind, caring, quiet" partner was planning.

Ms Danley, who spoke to the FBI on Wednesday after travelling back voluntarily from a holiday in the Philippines, expressed shock at the "horrible unspeakable acts of violence" Paddock had committed.

Paddock "never said anything to me or took any action" which she understood as a warning of what was to come, she said in a statement read by her lawyer. 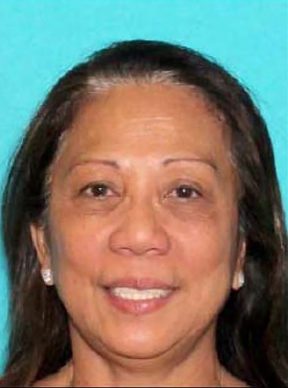 Ms Danley added: "I loved him and hoped for a quiet future together."

US authorities named Ms Danley a "person of interest" in their investigation and said they had made contact with her shortly after the shooting.

Ms Danley voluntarily flew back to Los Angeles from the Philippines on Tuesday night to speak to the FBI, just over two weeks after Paddock had surprised her with a "cheap ticket" to enable her to visit her family.

"I was grateful, but honestly I was worried it was a way for him to break up with me," she said. "It never occurred to me in any way whatsoever that he was planning violence against anyone."

Her sisters earlier told Australian outlet 7News that Ms Danley "was sent away ... so that she will not be there to interfere with what he's planning".

Paddock checked into a suite in the Mandalay Bay Hotel on 28 September, reportedly using some of Ms Danley's identity documents. 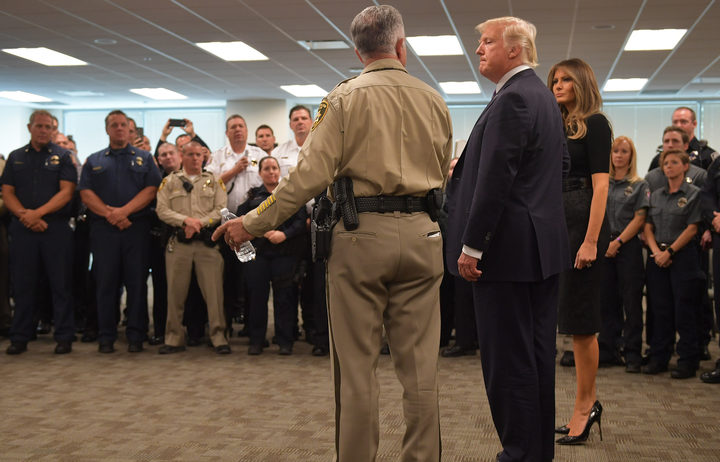 US President Donald Trump, who visited the city on Wednesday, said "America is truly a nation in mourning" in the wake of the mass killings.

Mr Trump praised the emergency services who battled to save as many as they could, despite the danger to themselves.

"When the worst of humanity strikes - and strike it did - the best of humanity responds," he said as he applauded injured officers.

"In the depths of horror, we will always find hope in the men and women who risk their lives for ours," he added.

Mr Trump said he was in the "company of heroes" after visiting the first responders.

"Words cannot describe the bravery that the whole world witnessed on Sunday night," he said. "Americans defied death and hatred with love and with courage."

First Lady Melania Trump joined the president to meet some of the victims and emergency responders on Wednesday.

Mr Trump told reporters at the University Medical Center in Las Vegas: "I have to tell you it makes you very proud to be an American when you see the job that they've done."