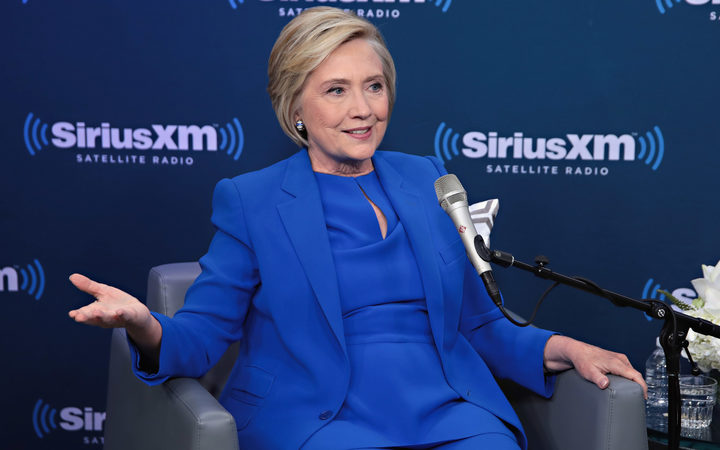 Hillary Clinton said the Trump administration "knew that there was no basis for all their hyperventilating" about her emails. Photo: AFP

Mr Trump's son-in-law Jared Kushner admitted to using his personal email and five other aides reportedly did so as well.

President Donald Trump repeatedly attacked Mrs Clinton's use of personal email while she was Secretary of State during the 2016 campaign. An FBI investigation concluded no charges were warranted over her emails.

Speaking to Sirius XM radio on Monday, Mrs Clinton said: "It's just the height of hypocrisy."

She said the Trump administration "knew that there was no basis for all their hyperventilating" about her emails.

"It is something that if they were sincere about it, I think you'd have Republican members of Congress calling for an investigation," she added.

The former Democratic presidential candidate added that her use of a private server at the State Department was a dumb mistake but a dumber scandal and she regretted the country "had to go through it".

Mr Kushner, a senior White House adviser, has been asked to preserve all his emails.

Newsweek magazine reported it had details of an email Ivanka Trump sent about collaboration with a business organisation, copying in two federal officials.

The House Committee on Oversight and Government Reform has sent a letter to the White House demanding more information.

It letter requests the identity of any "non-career official at the White House" who used a personal email account for official business, and the account used, and evidence of measures to ensure compliance with federal law. The letter sets a deadline of 9 October for the disclosure.

It is not illegal for White House officials to use personal email accounts for government business, but government officials must forward any official correspondence to a work account within 20 days for preservation.

If this is not done reliably, the use of private accounts can put official records beyond the reach of journalists, lawmakers and others who seek publicly available information.

In a statement Mr Kushner's lawyer said fewer than 100 emails were involved and all had been preserved.

There are key differences between Mr Kushner's case and that of Hillary Clinton.

Mrs Clinton had set up a private email server from her New York home - and used an email hosted by the server for all her emails, including at least 30,000 official emails, during her four years as Secretary of State.

She did not use, or even activate, a state.gov email account, which would have been hosted on servers owned and managed by the US government.

The FBI said that "several thousand" work-related emails were not turned over to the State Department, and that Mrs Clinton had been "extremely careless" in handling classified information. However, an investigation into the matter was closed without charges.