Scientists are piecing together new clues about the life of the dodo, hundreds of years after the flightless bird was driven to extinction. 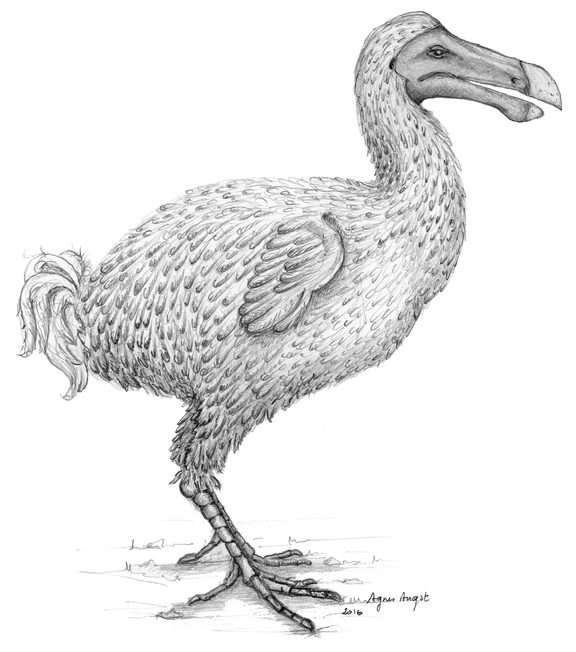 A reconstruction of the extinct dodo bird, by a team at the University of Cape Town. Photo: AFP

Few scientific facts are known about the hapless bird, which was last sighted in 1662.

A study of bone specimens shows the chicks hatched in August and grew rapidly to adult size.

Delphine Angst of the University of Cape Town, South Africa, was given access to some of the dodo bones that still exist in museums and collections, including specimens that were recently donated to a museum in France.

Her team analysed slices of bone from 22 dodos under the microscope to find out more about the bird's growth and breeding patterns.

"Before our study we knew very, very little about these birds," said Dr Angst.

"Using the bone histology for the first time we managed to describe that this bird was actually breeding at a certain time of the year and was moulting just after that."

The scientists can tell from growth patterns in the bones that the chicks grew to adult size very rapidly after hatching from eggs around August.

This would have given them a survival advantage when cyclones hit the island between November and March, leading to a scarcity of food.

However, the birds probably took several years to reach sexual maturity, possibly because the adult birds lacked any natural predators.

The bones of adult birds also show signs of mineral loss, which suggests that they lost old damaged feathers after the breeding season.

Ancient mariners gave conflicting accounts of the dodo, describing them as having "black down" or "curled plumes of a greyish colour".

The research, published in Scientific Reports, backs this historical evidence.

"The dodo was quite a brown-grey bird, and during the moulting it had downy, black plumage," explained Dr Angst.

"What we found using our scientific methods fit perfectly with what the sailors had written in the past."

The research could also shed light on the dodo's extinction about 350 years ago, less than 100 years after humans arrived on the island.

Hunting was a factor in the dodo's demise, but monkeys, deer, pigs and rats released on the island from ships probably sealed their fate.

Dodos laid their eggs in nests on the ground, meaning they were vulnerable to attack by feral mammals.

Dr Angst said the dodo is considered "a very big icon of animal-human induced extinction", although the full facts are unknown. 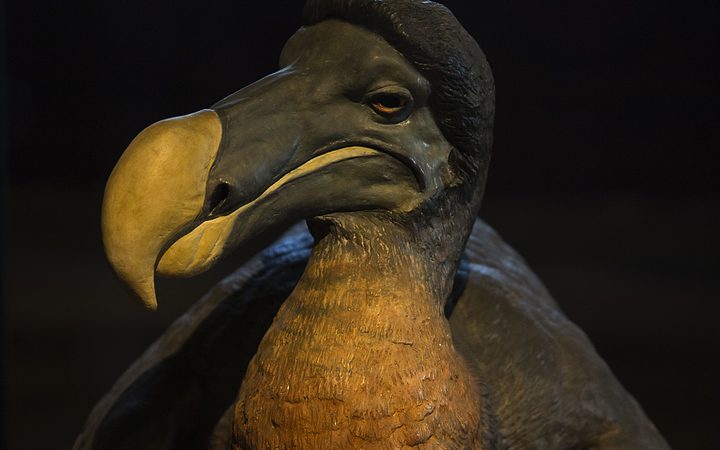 A stuffed dodo at the Museum of Natural History in Paris. Photo: AFP

"So that's one step to understand the ecology of these birds and the global ecosystem of Mauritius and to say, 'Okay, when the human arrived what exactly did they do wrong and why did these birds became extinct so quickly.'"

Julian Hume of the Natural History Museum, London, a co-researcher on the study, said there are still many mysteries surrounding the dodo.

"Our work is showing the seasons and what was actually affecting the growth of these birds because of the climate in Mauritius," he said.

"The cyclone season, when often the island is devastated with storms - all the fruits and all the leaves are blown off the trees - is quite a harsh period for the fauna - the reptiles and the birds on Mauritius."

The dodo, which is related to the pigeon, evolved on Mauritius.

However, bone samples are rare, making it difficult to trace the evolutionary process.

Although many specimens of the dodo ended up in European museums, most were lost or destroyed in the Victorian era.