Australian scientists have used satellite data provided by French authorities to further narrow down the area where Malaysia Airlines flight MH370 may have crashed. 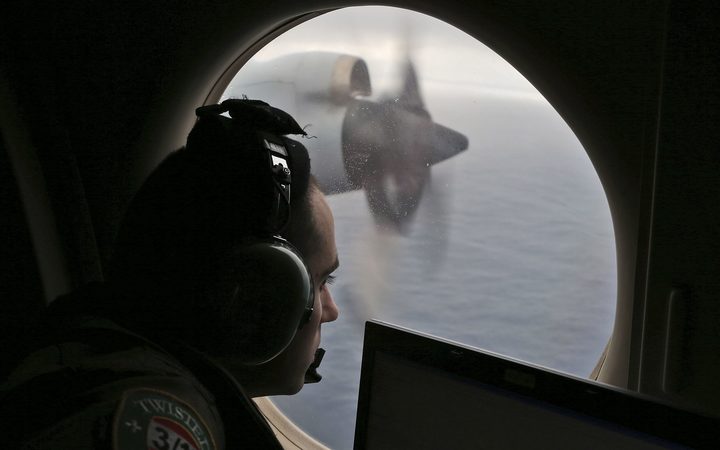 A crew member on a Royal Australian Air Force Orion searches for the missing flight in the southern Indian Ocean in 2014. Photo: AFP

The passenger plane disappeared in March 2014 with 239 passengers and crew on board, including New Zealander Paul Weeks, while travelling between Kuala Lumpur and Beijing.

The search for the plane was officially suspended in January this year, with Australian, Malaysian and Chinese authorities unable to locate it in the Indian Ocean.

The Commonwealth Scientific and Industrial Research Organisation (CSIRO) - the Australian government scientific research agency - and Geoscience Australia have analysed images of objects in the Indian Ocean, which were taken about two weeks after the plane disappeared.

CSIRO report co-author David Griffin, an oceanographer, explained why they were only analysed recently.

"In 2014 some satellites saw some items on the surface, but at that point there were lots of sightings from the satellites and none of those turned out to actually be relevant," he said.

"So that information was set aside. More recently, we've focused in on this area near 35 [degrees] south."

'Impossible to be sure' objects from MH370

Geoscience Australia has determined 12 of the objects were probably manmade.

Dr Griffin said they were seen 200 kilometres west of the "seventh arc", where it is thought the plane crashed.

"The question is how could something drift 200 kilometres west? And the answer is that we know that there is a narrow ocean current at that point, at that time which would explain why bits of the plane could be seen by satellite," he said.

The CSIRO said if the objects were from a plane, drift analysis was consistent with an area determined as having the highest probability of containing wreckage.

Its report said: "We think it is possible to identify a most likely location of the aircraft, with unprecedented precision and certainty. This location is 35.6 [degrees south], 92.8 [degrees east]."

It went on to say other nearby locations were "certainly possible" with a "high degree of confidence that an impact in the southern half of the 2016-proposed search area" was more consistent with debris in the images than an impact in the northern half.

However, Dr Griffin said it could not be determined for sure that the objects were from MH370, or any plane.

"No, that's the kicker, is that it's impossible to be totally sure that they are from the plane, but the thing is that they are not natural items; they are large objects which clearly are not wave caps.

"They are in the area where we expect to see debris if we are right about where the plane hit the water.

"If you assume that they are then they definitely do help refine our estimate of where the plane hit the water."

Dr Griffin said the only places left to search were close to what's already been covered.

The Australian Transport Safety Bureau has advised caution, saying the objects had not been identified as being from MH370.

It said the CSIRO's drift study found the believed location of the objects identified in most of the satellite images on 8 March was consistent with the area determined by experts in the First Principles Review.

The bureau's chief commissioner Greg Hood said the information in the Geoscience and CSIRO reports "may be useful in informing any further search effort that may be mounted in the future".

The Federal Government said Malaysia was the lead investigator.

The foreword of the CSIRO's report said: "This work is dedicated to the 239 people aboard flight MH370".