North Korea has vowed to make "the United States pay a price" for drafting fresh UN sanctions over its banned nuclear weapons programme. 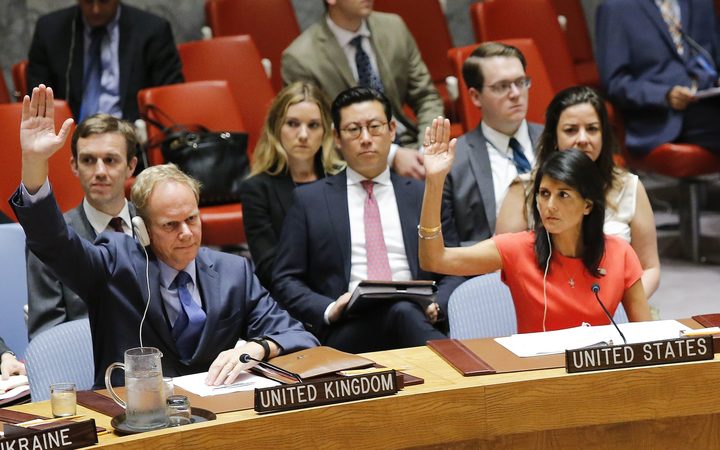 US Ambassador to the United Nations Nikki Haley, right, and Britain's Ambassador Matthew Rycroft vote on the sanctions. Photo: AFP

The sanctions, which were unanimously passed by the UN on Saturday, were a "violent violation of our sovereignty," the official KCNA news agency said.

Separately, South Korea said the North has rejected an offer to restart talks, dismissing it as insincere.

The sanctions aim to reduce North Korea's export revenues by a third.

The UN Security Council decision followed repeated missile tests by the North which have escalated tensions on the peninsula.

In its first major response on Monday, North Korea insisted that it would continue to develop its nuclear weapons programme.

The KCNA news agency said Pyongyang would "not put our self-defensive nuclear deterrent on the negotiating table" while it faced threats from the US.

It threatened to make the US "pay the price for its crime ... thousands of times", referring to America's role in drafting the UN sanctions resolution.

Speaking to reporters at a regional forum in the Philippine capital, Manila, North Korean spokesman Bang Kwang Hyuk said: "The worsening situation on the Korean peninsula, as well as the nuclear issues, were caused by the United States.

"We affirm that we'll never place our nuclear and ballistic missiles programme on the negotiating table, and won't budge an inch on strengthening nuclear armament."

The remarks come after reports emerged that the North and South Korean foreign ministers had met briefly on Sunday evening on the sidelines of the Association of Southeast Asian Nations (Asean) summit in Manila.

A South Korean official told the BBC that Mr Ri had dismissed Ms Kang's offer of talks as "insincere". 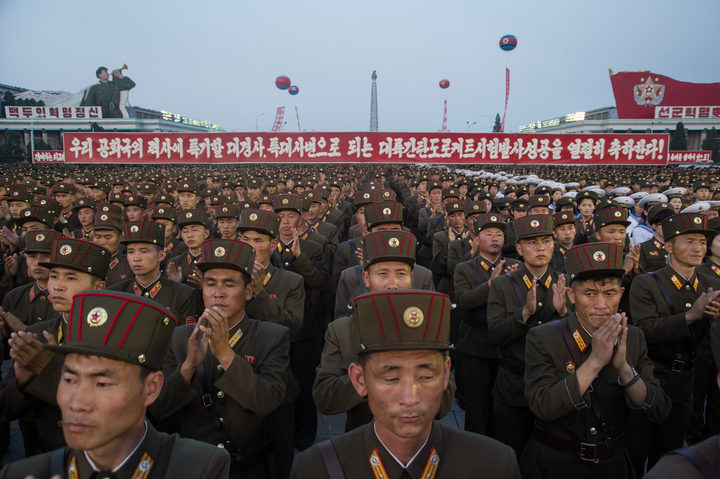 South Korean news agency Yonhap reported Ms Kang as saying that Mr Ri's rejection of the talks proposal appeared to be connected to the new sanctions.

"I told him that [the two offers for talks] are an urgent matter that should be carried out immediately with any political agenda put aside and asked him to proactively react," she was quoted as saying.

The foreign minister of China, which is Pyongyang's closest ally, told journalists on Monday: "My feeling is that the North did not entirely reject the positive proposals raised by the South."

Wang Yi said China also supported the South's initiatives, and was "100 percent" committed to enforcing the latest round of UN sanctions.

US Secretary of State Rex Tillerson is at the Asean forum and he spoke about North Korea.

Noting Russia and China's participation in the unanimous vote, he told journalists it was clear there was now "no daylight among the international community" on their desire for North Korea to stop its tests.

"The best signal that North Korea can give us [is] that they are prepared to talk would be to stop these missile launches," he said.

Russia and China have previously differed with others on how to handle Pyongyang, but in recent months have joined calls for North Korea to stop its missile tests - while also urging the US and South Korea to halt military drills, and withdraw an anti-missile system from the South.

On Monday, US President Donald Trump spoke to his South Korean counterpart Moon Jae-in over the phone about relations on the Korean peninsula.

They agreed that North Korea "poses a grave and growing direct threat" and the two leaders were committed to fully implementing the latest round of UN sanctions, the White House said in a statement.