The United States and Qatar have signed an agreement aimed at combating the financing of terrorism, as US Secretary of State Rex Tillerson visits Doha to try to end a month-long rift between Western-allied Arab states. 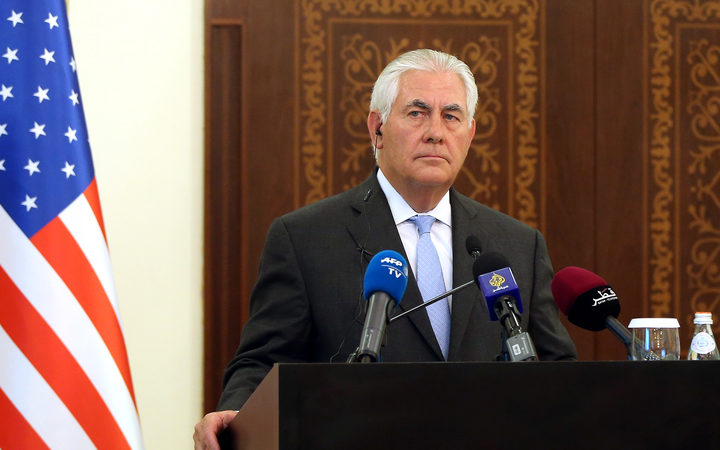 Mr Tillerson said the agreement signed with his Qatari counterpart, Sheikh Mohammed bin Abdulrahman al-Thani, had been under discussion for weeks.

"The agreement which we both have signed on behalf of our governments represents weeks of intensive discussions between experts and reinvigorates the spirit of the Riyadh summit," Mr Tillerson said at a joint news conference with Sheikh Mohammed.

US President Donald Trump met representatives of Arab states during a visit to Saudi Arabia in May.

"The memorandum lays out a series of steps that each country will take in coming months and years to interrupt and disable terror financing flows and intensify counter terrorism activities globally," Mr Tillerson added.

The four Arab states boycotting Qatar said later on Tuesday that sanctions would remain in place until it met their demands and that they would keep a close eye on the tiny Gulf monarchy's efforts to fight terrorism funding.

In a joint statement released in their state media, Egypt, Saudi Arabia, the United Arab Emirates and Bahrain said they appreciated US efforts in fighting terrorism but that they would closely monitor Qatar's behaviour.

Sheikh Mohammed said the agreement was not linked to the crisis with the four Arab countries, which the United States fears could impact its military and counter-terrorism operations and increase Iran's influence in the region.

Tehran has sent food supplies to Qatar and allows the country's carrier to fly through its airspace.

Qatar denies it supports militant organisations and says the boycott is part of a campaign to rein in its independent foreign policy.

"Today, the state of Qatar was the first to sign the executive program with the United States to fight terrorism financing," Sheikh Mohammed told the news conference.

Mr Tillerson said the agreement included milestones to ensure both countries were accountable through their commitments.

Egypt later said at a meeting of the US-led coalition against Islamic State in Washington that the coalition should not include member states that supported terrorism, like Qatar.

A US official who had knowledge of the deliberations at the meeting later said "the other working group countries dismissed the Egyptian demand".

"Terrorism is a global problem that requires a global response - and we all have work to do," the US official, who spoke on condition of anonymity, said.

Accompanied by Kuwaiti mediators, Mr Tillerson flew to Doha on Tuesday for talks with the Emir of Qatar, Sheikh Tamim bin Hamad al-Thani, over the crisis. He said he was due to travel to Saudi Arabia for talks with officials from the four Arab countries.

On Monday, he and British National Security Advisor Mark Sedwill met with officials from Kuwait in order to patch up the row among the Western-allied countries.

Kuwait's ruler, Sheikh Sabah al-Ahmad al-Jaber al-Sabah, expressed "bitterness" on Tuesday over what he described as an unprecedented rift in the Gulf, but said he intended to push ahead with mediation efforts.

Foreign ministers from the four Arab states leading the boycott of Qatar will meet with Mr Tillerson in the Saudi Arabian city of Jeddah on Wednesday.

Coming from some of the most influential powers in the dispute, the plea for a negotiated solution may be aimed at an earlier refusal by Qatar's adversaries to discuss renewing ties with Doha until it first acquiesced to a list of demands. They include closing the Al Jazeera TV channel, shutting a Turkish military base in Qatar and downgrading ties with Iran.

Qatar hosts Udeid Air Base, the largest US military facility in the Middle East, from which US-led coalition aircraft stage sorties against Islamic State in Syria and Iraq.

US President Donald Trump has expressed support for Saudi Arabia in the dispute.