At least five people have died in the Afghan capital Kabul, officials say, after police opened fire on protesters demanding the government step down in the wake of a devastating bomb attack. 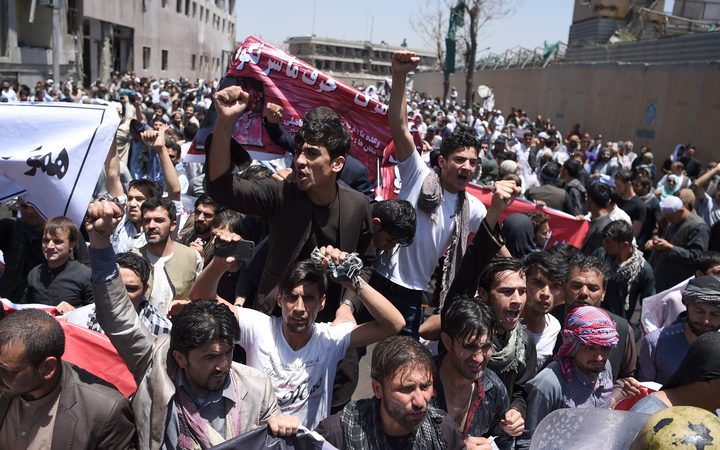 Afghan protesters during a protest against the government following a catastrophic truck bomb attack near Zanbaq Square in Kabul. Photo: AFP

Crowds rallied near the site of Wednesday's blast, chanting anti-government and anti-Taliban slogans.

Police in riot gear also used tear gas and water cannon to block them from the presidential palace.

About 90 people died in the bomb blast, one of the deadliest in Kabul in years.

One of those killed during Friday's demonstration was reportedly the son of a prominent politician. Other reports put the death toll at seven, with several other people wounded.

No group has said it carried out Wednesday's bomb attack.

Afghan intelligence officials have pointed the finger at the Haqqani network - a Taliban affiliate - and have alleged support from Pakistan. Pakistan has roundly rejected the claims, calling them "baseless".

The Taliban denied any role and there has been no comment from Islamic State, who are usually quick to claim attacks.

The blast - caused by explosives packed in a tanker - took place close to the heavily-guarded diplomatic area. Most of the victims were Afghan civilians, and hundreds of people were injured.

There have been a series of attacks in the capital and elsewhere in recent months. 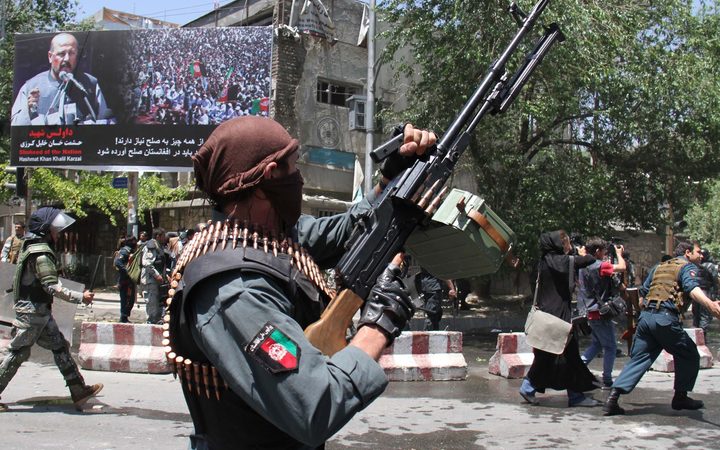 Afghan police clash with protesters during the protest. Photo: AFP

Many of the more than 1000 protesters on Friday accused the government of failing to address security issues.

"The international community has to put pressure on them and force them to resign," protester Niloofar Nilgoon told the Reuters news agency.

"They're not capable of leading the country."

Another man told AFP news agency that leaders were "doing nothing to stop this carnage".

"We want justice, we want the perpetrators of the attack to be hanged," civil society activist Rahila Jafari said.

Some of the protesters were throwing stones, one report said, and a car was flying a banner that read "Ghani! Abdullah! Resign! Resign!" - a reference to Afghan President Ashraf Ghani and chief executive Abdullah Abdullah.

More than a third of Afghanistan is now said to be outside government control.

The US has about 8400 troops in Afghanistan, and there another 5000 from Nato allies.

The Pentagon has reportedly pressed US President Donald Trump to send thousands more troops to Afghanistan after a top commander warned of "stalemate" in the fight against the Taliban.