A massive section of floating ice in Antarctica is about to break away, creating one of the largest known icebergs. 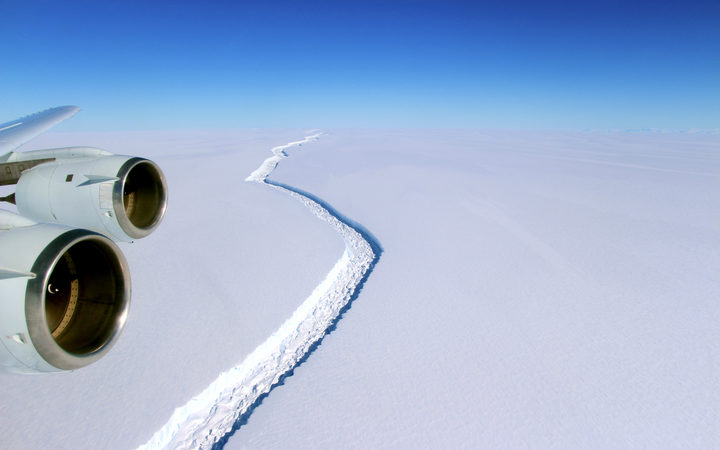 Scientists monitoring a large crack which cuts across the Larsen C Ice Shelf say it has grown significantly in the past week.

Dr Sue Cook from the Antarctic Climate and Ecosystems Cooperative Research Centre in Hobart said, when it sheared off, it would create an iceberg 5000 square kilometres in size.

"We're actually incredibly close to it breaking away now. The crack has grown by 16km in the last week. It's now only 13km away from creating an iceberg."

Dr Cook said, once it broke off, the ice shelf would lose 10 percent of its area, threatening the stability of the rest of the shelf.

The fissure currently extends for about 200km in length.

The rift in Larsen C has grown by 17km in the last few days, and is now only 13km from the ice front. More details: https://t.co/thwsB75fYM pic.twitter.com/TUay0gu8s3

The crack put on its latest spurt between 25 May and 31 May. These dates were the two most recent passes of the European Union's Sentinel-1 satellites. Their radar vision is keeping up a constant watch as the white continent moves into the darkness of deep winter.

After some initial activity at the beginning of the year, the Larsen crack became stationary as it entered what is termed a "suture" zone - a region of soft, flexible ice. But this situation held only until the beginning of May, when the rift tip then suddenly forked. And it is the new branch that has now extended and turned towards the ocean.

Swansea University's Prof Adrian Luckman said when the berg's calving did finally take place, the block would likely drift away quite gradually from the ice shelf.

"It's unlikely to be fast because the Weddell Sea is full of sea-ice, but it'll certainly be faster than the last few months of gradual parting. It will depend on the currents and winds," Prof Luckman told the BBC.

Similar calving events on the more northerly Larsen A and Larsen B ice shelves eventually led to their total break-up. Scientists are concerned that this same fate could now await Larsen C.

Were the shelf to collapse (and even if it did, it would still take many years to complete), it would continue a trend across the Antarctic Peninsula.