Terry Selwood was probably wishing for a bigger boat, after a 2.7m great white shark launched itself from the waters off the north coast of NSW into his 4.5m vessel. 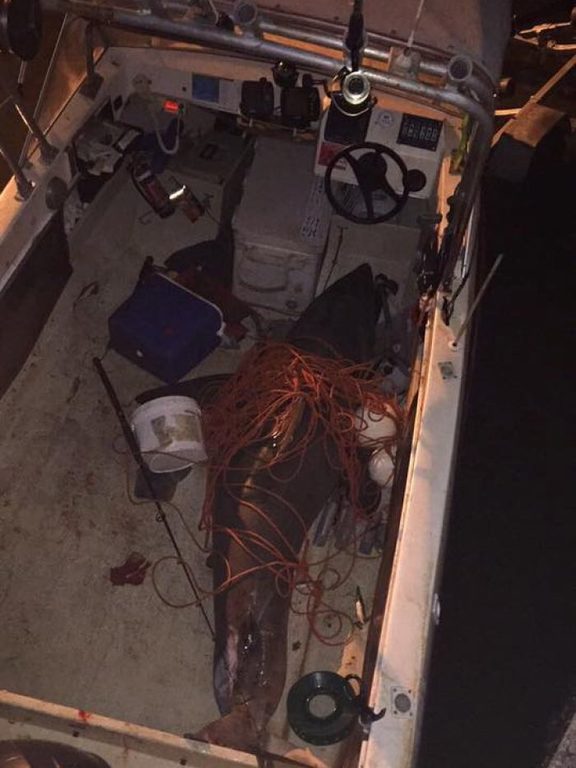 Mr Selwood, 73, was fishing offshore at Evans Head in the Australian state when the shark launched itself into his boat.

"I caught a blur of something coming over the boat ... and the pectoral fin of the shark hit me on the forearm and knocked me down on the ground to my hands and knees," Mr Selwood said.

"He came right over the top of the motor and then dropped onto the floor.

"There I was on all fours and he's looking at me and I'm looking at him and then he started to do the dance around and shake and I couldn't get out quick enough onto the gunwale," Mr Selwood said.

"I was losing a fair amount of blood, I was stunned, I couldn't register what happened and then I thought oh my God, I've got to get out of here."

Marine Rescue Unit commander Karen Brown said a crew was sent out to rescue Mr Selwood after he radioed in, then went back a second time to retrieve the boat and the shark.

Mr Selwood said the conditions that Saturday afternoon were smooth, and there were no surface fish or any other clear reason the shark would breach.

"I didn't have a burly out, which does attract sharks," he said.

"I was using two little bits of blue pilchard to fish for snapper on the bottom of the ocean, but that line was straight under the boat, not out the back where he came from."

For such a close brush with a shark, Mr Selwood came off relatively lightly.

"People said I'd been bitten by a shark but he didn't, he just hit my arm - because sharks have very rough skin - and he just tore the skin off it.

Mr Selwood was taken to hospital and treated for his injuries, and has since returned home where he said he was nursing a very swollen arm.

He said the Department of Primary Industries had lifted the shark, which he initially thought was a mako, out of his boat with a forklift and taken it away for an autopsy to confirm its age and gender.

Mr Selwood said he had been fishing for close to 60 years, but had never been through anything like this.

Despite his close encounter, Mr Selwood said he was desperate to get back out to wet a line.

"It won't deter me from fishing, no way in the world," he said.

He said he would have to find a bigger animal if he ever wanted to top the experience.

"I think next time I might find a crocodile to wrestle, just to stay in the limelight," he said.

"But really, it's not a great story, it's just a mundane thing that just happened and it's over and done with, but something that I'll remember."

"But we're all well and now I'll just get on with life and repair the damage he made to my boat."