US President Donald Trump has said leaks of the investigation into the Manchester Arena attack to American media are "deeply troubling". 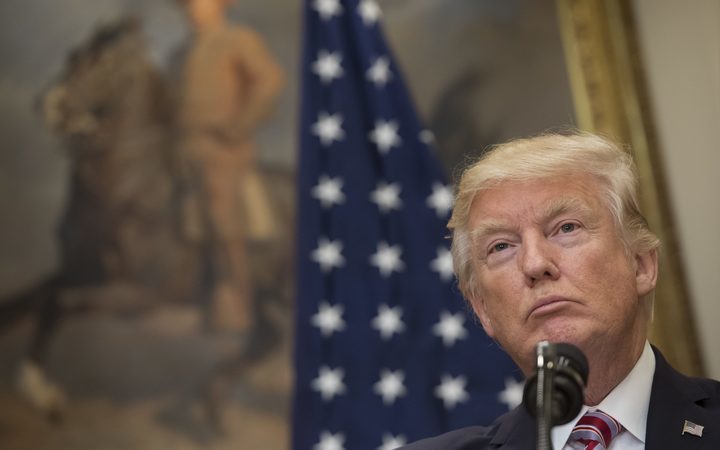 US President Donald Trump said he would ask the US Department of Justice to launch a review into the leaks (file photo). Photo: AFP

They were a "grave threat to our national security", he added, and pledged to get to the bottom of it.

His remarks come after US media published photos from the scene of Monday night's explosion, which killed 22 people and injured 116.

The BBC reported yesterday that British police investigating the attack had temporarily stopped sharing information with the US after the leaks.

"While we do not usually comment on information-sharing arrangements ... having received fresh assurances, we are now working closely with our key partners around the world including all those in the 'Five Eyes' intelligence alliance," said Mark Rowley, Britain's lead officer for counter-terrorism policing.

The Five Eyes alliance is made up of Britain, the United States, Canada, Australia and New Zealand.

British Prime Minister Teresa May earlier spoke to Mr Trump at a NATO summit in Brussels to say intelligence shared between their two countries had to remain secure.

Meanwhile, in the Greater Manchester town of Wigan, police sealed off a street and called in a bomb disposal unit as they searched a property.

The address was first raided last night, but by late afternoon, officers found "something they didn't like" and cleared all the residents from the street, the BBC's Danny Savage said.

A police spokesman said: "Potentially suspicious items were found at the address and a large cordon has been put in place as EOD (explosive ordnance disposal) make an assessment."

The items have since been "dealt with" and the cordon lifted.

Their searches came after British-born 22-year-old Salman Abedi blew himself up at the end of US pop singer Ariana Grande's concert at the arena three days ago.

The New York Times outraged British police and government officials on Wednesday (Thursday NZT) when it published photos appearing to show debris from the attack. They included bloodstained fragments from the bomb and the backpack used to conceal it.

Greater Manchester Police were said to be "furious" and said they would stop sharing information with the US.

Its chief constable, Ian Hopkins, said the leak undermined the investigation and had distressed families "already suffering terribly with their loss".

The Times has defended its decision to publish the pictures, saying they were "neither graphic nor disrespectful of victims".

UK officials believed that US law enforcement rather than the White House was the likely culprit for the leaks, BBC security correspondent Gordon Corera said.

In an earlier leak, Abedi's name was given to US media 24 hours after the attack - reportedly against the UK's wishes.

At the summit in Brussels, Mr Trump said: "These leaks have been going on for a long time."

He pledged to ask the US Department of Justice to launch a review, and "if appropriate, the culprit should be prosecuted".

"There is no relationship we cherish more than the special relationship between the US and the UK," he added.

In a speech at the summit, Mr Trump said the attack in Manchester demonstrated the "depths of the evil we face with terrorism".

"Innocent little girls and so many others were horribly murdered and badly injured whilst attending a concert," he said.

"Beautiful lives with so much great potential, torn from their families for ever and ever. It was a barbaric and vicious attack upon our civilisation.

"All people who cherish life must unite in finding, exposing and removing these killers and extremists, and yes, losers, they are losers.

"Wherever they exist in our societies we must drive them out and never, ever let them back in."

Earlier, the top US diplomat in the UK, Lewis Lukens, condemned the leaks as "reprehensible" and told the BBC action would be taken to identify those responsible.

It comes as police described the eight arrests made since the bombing as "significant", and items seized in raids as "very important".

Abedi detonated his "nuts-and-bolts" bomb at the end of the concert as people were making their way out of the arena. Others were waiting in the foyer to pick up family and friends.

Security officials say they have thwarted 18 plots since 2013, including five since the Westminster attack in March.

Police believe Abedi, who was born in Manchester and was from a family of Libyan origin, acted as part of a network.

Whitehall sources say he was among a "large pool of people whose risk was kept under review" by security services.

The bomber's older brother Ismail, 23, is among the eight men arrested. A woman was also arrested but has since been released.

Raids involving controlled explosions have been carried out at flats in the city centre and at an address in the Moss Side area of Manchester.

In the Libyan capital Tripoli, Abedi's younger brother Hashem, 20, and their father, Ramadan, were held by special forces linked to the interior ministry.