Two Chinese jets have conducted an "unprofessional" intercept of a US aircraft, the US military said. 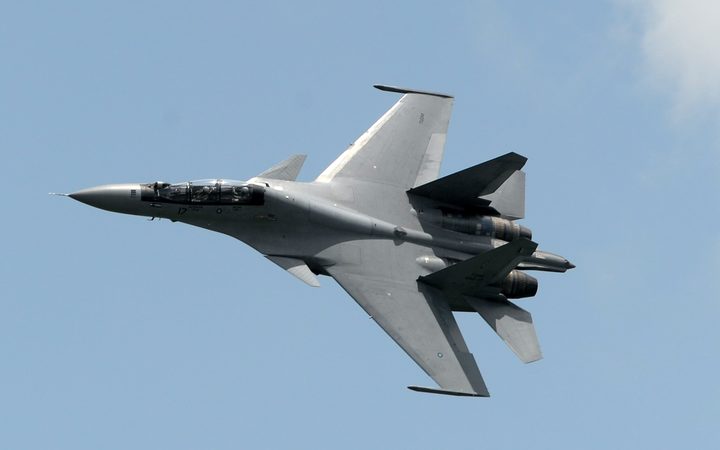 A file photo of a Sukhoi SU-30 fighter jet, the same type used in the alleged interception by the Chinese. Photo: AFP

One of the Chinese jets came as close as 150 feet to the US plane and flew upside down above it, according to US officials cited by CNN.

The US said the plane was on a mission to detect radiation in international airspace over the East China Sea.

Tensions have repeatedly risen over US activity near the resource-rich international waters off China's coast.

The intercept, which took place on Wednesday, was deemed unprofessional "due to the manoeuvres by the Chinese pilot, as well as the speeds and proximity of both aircraft," Air Force spokesman Lieutenant Colonel Lori Hodge said.

He said the issue was "being addressed with China through appropriate diplomatic and military channels", and a military investigation was under way.

China has not commented on the incident, but it accuses the US of carrying out reconnaissance flights over Chinese coastal waters and regularly calls on the US to reduce patrols in the area.

China claims sovereignty over almost all of the disputed territory in the South and East China seas, though several other countries in the region have competing claims.

China has backed its expansive claims with island-building and naval patrols.

The US sniffer aircraft has previously been used to detect evidence of possible nuclear tests by North Korea.

Separately, China and South East Asian countries have agreed a framework for a long-awaited code of conduct for the disputed South China Sea, China's foreign ministry said, without giving details on the content.

It will now be submitted to the foreign ministers of the countries in August.

Over the years, the US, China and several of the South East Asian countries have had disputes over rival activity in the South China Sea.

In February, a US aircraft carrier started what Washington described as "routine operations" in the South China Sea, with a fleet of supporting warships.

The deployment came despite Chinese warnings against challenging Beijing's sovereignty in the region.

In May 2016, two Chinese fighters carried out a similar intercept of a US military aircraft over the South China Sea.

At the time, the US military said its maritime reconnaissance aircraft was carrying out a routine patrol in the area.

In 2001, a Chinese jet and a US Navy surveillance aircraft collided off Hainan Island, killing the Chinese pilot.

The US spy plane was forced to make an emergency landing on the island and China held the crew members for 11 days, sparking a major diplomatic standoff.