Authorities in Indian-administered Kashmir have announced a one-month ban on 22 social media services, including Facebook, Twitter and WhatsApp. 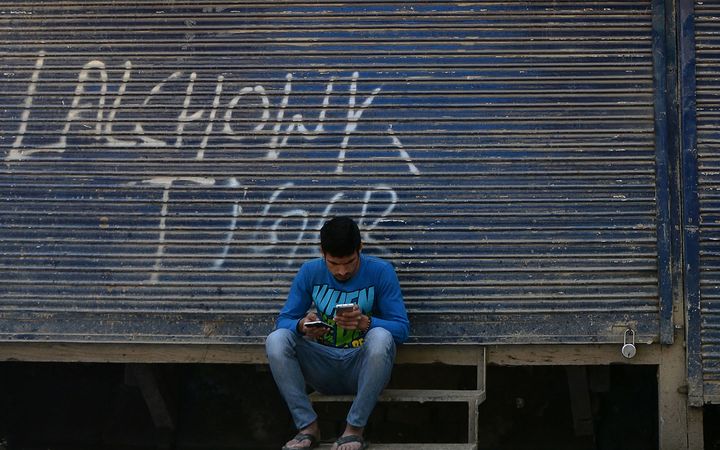 A Kashmiri man looks at his mobile phones in front of shuttered shops in Srinagar. Photo: AFP

The state government said the services were being misused by "anti-government elements" to incite violence.

Graphic videos claiming to show abuses on both sides have been shared extensively.

At least nine people have died in widespread violent clashes with the security forces in the disputed region.

Other social media services, communications tools and websites to have been banned under the order include YouTube, Skype, Telegram, Snapchat and Reddit.

The state government order said "objectionable contents" were being distributed to "spread disaffection" with the authorities.

The latest bout of violence began on 9 April when eight people were killed and scores injured after police clashed with protesters during a by-election in the city of Srinagar.

Since then, hundreds of students have protested on the streets, chanting anti-India slogans and throwing stones at the security forces.

Graphic videos claiming to show abuses on both sides have been shared extensively on social media and have added fuel to the conflict.

In recent weeks, schools have been set on fire and police say three politicians have been killed by unknown gunmen.

Muslim-majority Kashmir is at the centre of a decades-old territorial dispute between India and Pakistan.

India accuses Pakistan of supporting separatist sentiment in Kashmir, but Islamabad denies this. Both countries claim Kashmir in its entirety and control different parts of it.