The death toll from a bomb blast on a crowded Syrian bus convoy outside Aleppo has risen to nearly 130, says a monitoring group. 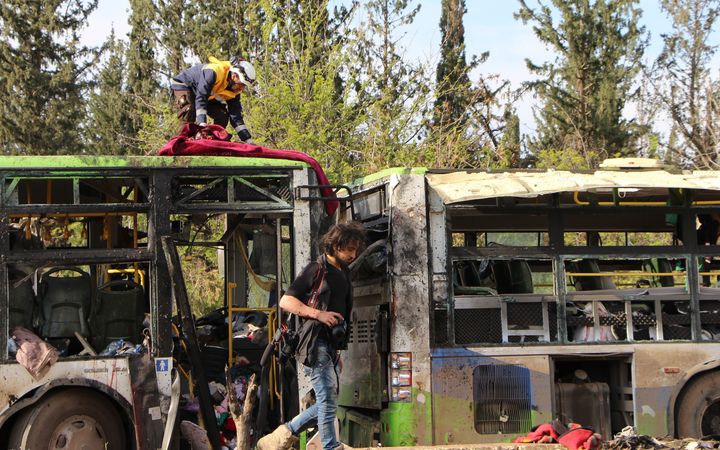 Damaged vehicles at the site of a bomb-laden vehicle attack on the convoy. Photo: AFP

Syrian rescue workers said that they had carted away at least 100 bodies from the site of the blast, which hit buses carrying Shi'ite residents as they waited to cross from rebel into government territory in an evacuation deal between warring sides.

The British-based monitoring group the Syrian Observatory for Human Rights says 126 people, including children are known to have died.

The car bomb blast shattered the buses and set cars on fire, leaving a trail of bodies including children, as the convoy waited in rebel territory near Aleppo.

There were fears of revenge attacks on a convoy of evacuees from rebel-held towns, being moved under a deal.

But the exchange later resumed, with coaches reaching safety on both sides.

The "Four Towns" deal brokered by Iran and Qatar was meant to relieve suffering in besieged towns - Foah and Kefraya in the north-west which were under government control, and rebel-held Madaya and Zabadani near Damascus.

About 20,000 besieged people would be taken out in all. According to AFP news agency, up to 5000 government evacuees and 2200 from rebel towns had been stranded in transit on Sunday.

Last month, the UN described the situation in the besieged towns as "catastrophic". More than 64,000 civilians are "trapped in a cycle of daily violence and deprivation", it said.

The bomb reportedly went off at Rashidin, west of government-held Aleppo, around 3.30pm (local time) at the checkpoint where the handover was due to take place. 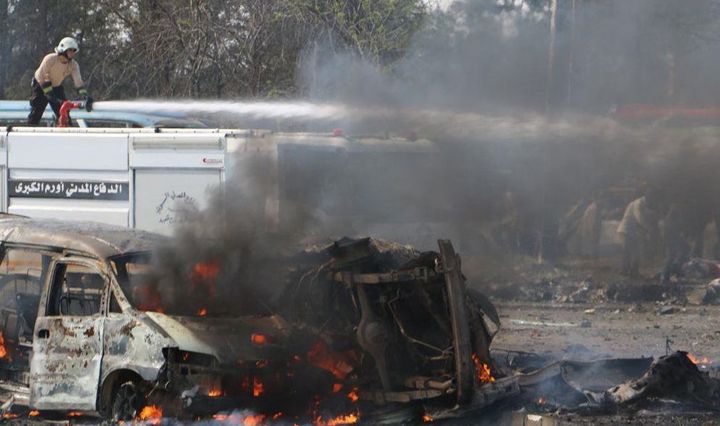 Civil team members try to extinguish a fire after the blast. Photo: AFP

A suicide bomber driving a van supposedly carrying aid supplies blew it up near the coaches, the Syrian Observatory for Human Rights reported.

Images from the scene show bodies lying on the ground outside blackened and devastated vehicles.

"There are dead people everywhere. You can see tens of burnt out cars, bodies everywhere," said an unnamed eyewitness, describing the carnage for Syria's Qasioun news agency.

"Emergency staff and opposition factions are evacuating the wounded and the martyrs [the dead]."

Convoys on both sides had been held up overnight, but by Saturday evening 15 coaches from the government towns had arrived at their destination in Ramouseh while between 25 and 30 carrying evacuees from the rebel towns had reached Rashidin.

Rebels had accused the government of breaching the terms of the deal, accusing it of trying to bring out more loyalist fighters than agreed, along with civilians.

Where does this leave the rebel evacuees?

According to news organisation 24Aleppo, a special unit of the Russian army surrounded the convoy from the rebel-held towns after the bombing and closed the road there to "prevent any reaction".

Evacuees from Madaya called on international organisations to protect them from any possible retaliation, saying they condemned the attack on the other convoy.

"Everyone here is on a tether following the Rashidin bombing," they said in a statement.

"We are holding the guarantors of the Four Towns deal responsible for our safety as the Shia towns and regime troops around us are on the highest alert."

Madaya resident Ahmed, 24, told Reuters earlier that evacuees have been waiting without drinking water or food at a bus garage in Aleppo since Friday night.

"The bus garage is small so there's not much space to move around," he said. "We're sad and angry about what has happened."

The Madaya and Zabadani evacuees are meant to be transferred to rebel-held territory in Idlib province.

Why are the evacuations needed?

Many people were reported to have died as a result of shortages of food or medicine in the four towns.

Foah and Kefraya, most of whose residents are Shia Muslims, have been encircled by rebels and al Qaeda-linked Sunni Muslim jihadists since March 2015.

Madaya and Zabadani, which are predominantly Sunni Muslim, have been besieged since June 2015 by the Syrian army and fighters from Lebanon's Shia Muslim Hezbollah movement.

A previous attempt at mutual evacuations failed in December when rebels burnt coaches due to be sent to the towns.