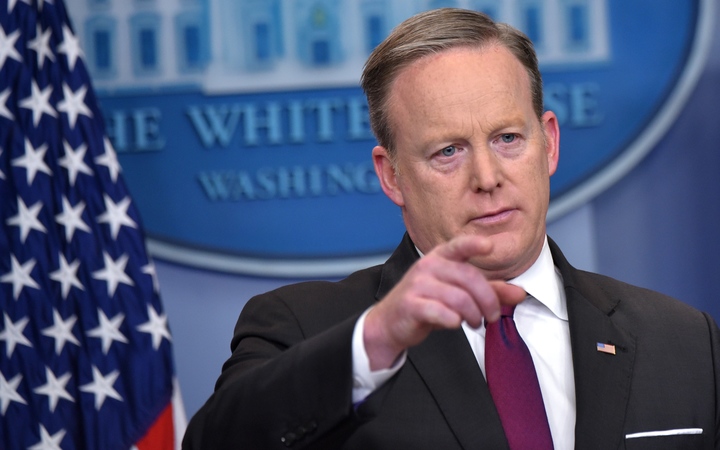 President Donald Trump's spokesman increased pressure on Russia over a chemical weapons attack in Syria last week, but was mocked on social media for his claim that Hitler did not use chemical weapons.

"We had someone as despicable as Hitler who didn't even sink to using chemical weapons," said Mr Spicer..

But critics pointed out the Nazis used gas to kill Jews and others in the Holocaust.

Asked to clarify comment his comment, Mr Spicer said "He was not using the gas on his own people" as Syrian President Bashar Assad did.

Up to 180,000 German jews were killed as a part of the Holocaust

Ar the same press conference, Mr Spicer called Moscow isolated and said it was trying to shift blame away from the Syrian president.

"Russia is on an island when it comes to its support of Syria," he told reporters.

The nerve gas attack, which killed 87 people, many of them children, and Russia's allegation that rebels and not Damascus were responsible have chilled US relations with Moscow.

"In this particular case, it's no question that Russia is isolated. They have aligned themselves with North Korea, Syria, Iran. That's not exactly a group of countries you're looking to hang out with. With the exception of Russia, they are all failed states," Mr Spicer said.

The attack led the Trump administration to harden its attitude against Mr Assad weeks after top US officials said they were more concerned with defeating Islamic State militants than getting Assad out of power.

"I don't see a peaceful, stable Syria in the future that has Assad in charge," Spicer said. "I don't see a future Syria that has (Assad) as the leader of that government."