US President Donald Trump has condemned the killing of dozens of civilians in northern Syria in an apparent chemical weapons attack by Syria's air force. 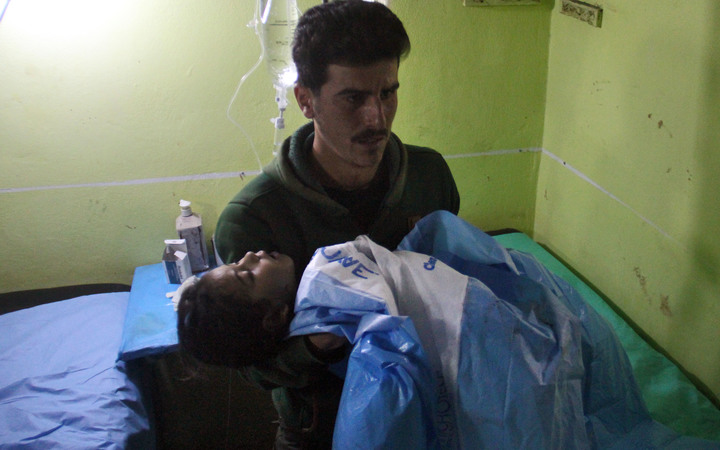 An unconscious Syrian child is carried at a hospital in Khan Sheikhoun following the suspected toxic gas attack on 4 April. Photo: AFP

It was an "affront to humanity", he said, adding: "When you kill innocent children, innocent babies, little babies... that crosses... many lines." 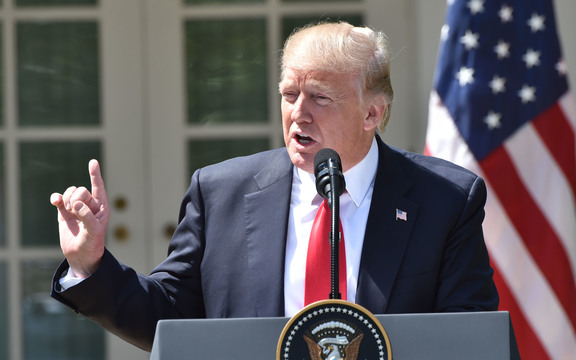 He did not mention Russia, Syria's ally, which says chemical weapons in rebel hands may have been released.

But America's envoy to the UN accused Russia of covering up for Damascus.

Hinting at possible unilateral action by the US, she added: "When the United Nations consistently fails in its duty to act collectively, there are times in the life of states that we are compelled to take our own action."

According to UK-based monitoring group the Syrian Observatory for Human Rights, 20 children and 52 adults were killed in the chemical incident in Khan Sheikhoun, Idlib province, on Tuesday.

Footage following the incident shows civilians, many of them children, choking and foaming at the mouth.

Both the World Health Organisation and medical charity MSF said some of the victims had symptoms consistent with exposure to nerve agents.

Witnesses say clinics treating the injured were then targeted by air strikes.

Mr Trump said: "I will tell you, it's already happened, that my attitude towards Syria and Assad has changed very much... You're now talking about a whole different level."

Asked during a meeting with Jordan's King Abdullah at the White House whether he was formulating a new policy towards Syria, Mr Trump told reporters, "You'll see."

US Secretary of State Rex Tillerson called on Russia to "think carefully" about its continued support for Mr Assad.

"There's no doubt in our mind that the Syrian regime under the leadership of Bashar al-Assad is responsible for this horrific attack," said Mr Tillerson, who is due to visit Moscow next week.

Only last week, Ms Haley said the US was no longer prioritising the removal of Mr Assad, a shift in US policy from the Obama era.

Russia has acknowledged that Syrian planes did attack Khan Sheikhoun but says the aircraft struck a depot producing chemical weapons, for use by militants in Iraq.

On Tuesday "Syrian aviation made a strike on a large terrorist ammunition depot and a concentration of military hardware in the eastern outskirts of Khan Sheikhoun town," Russian defence ministry spokesman Igor Konoshenkov said.

"On the territory of the depot there were workshops which produced chemical warfare munitions."

How does the Russian theory stack up?

The idea that a nerve gas like sarin could spread after a weapons manufacturing process had been bombed was "unsustainable", he added.

Hasan Haj Ali, commander of the Free Idlib Army rebel group, told Reuters: "Everyone saw the plane while it was bombing with gas."

However, the official who led the UN-backed operation to remove Syria's chemical weapons told the UK's Channel 4 News that the Russian version of events could not be discounted.

"If it is sarin that was stored there and conventional munitions were used, there is every possibility that some of those [chemical] munitions were not consumed and that the sarin liquid was ejected and could well have affected the population," Jerry Smith said.

Local journalists say there are no military positions in the town itself but an array of broadly aligned rebel groups controlling the area surrounding it.

Critics of the Russian statement say reports of the release of gas came hours before the times stated by Mr Konoshenkov.

Has Assad used chemical weapons before?

The Syrian government was accused by Western powers of firing rockets filled with sarin at Ghouta, Damascus, killing hundreds of people in August 2013.

Despite that, the Organisation for the Prohibition of Chemical Weapons has continued to document the use of toxic chemicals in attacks in Syria.

More than 250,000 people have been killed in Syria's civil war and, after more than six years, no political solution to the fighting is in sight.